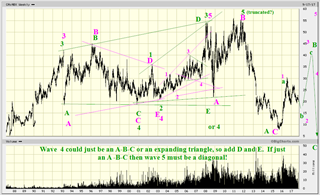 In that blog of almost two months ago we suggested that it might be worth waiting for the stock to drop to $18/$17 in order to complete a counter-trend pullback within a large A-B-C correction from the highs. This B leg has now taken more than 16 months  and has retraced more than 50% of the rise from the lows of $8 to about $30. It should be within , roughly, $1 of its ultimate target. Then the A-B-C should resume with a target of about $36. The RSI is oversold and supports the notion that a move up is next.

All of this applies also to the XAU. It’s waves differ slightly but the end result should be similar. It has potential to roughly 140 /150. See that Sept. 17 blog and below; 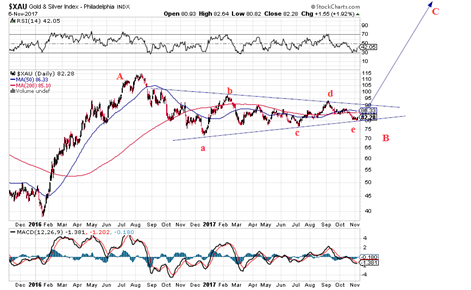 This is on a semi-log scale and consequently it looks rather compressed, perhaps also because the XAU is measured in US dollars. It is not the most elegant count by any means but is still plausible and remains compatible with ABX above. 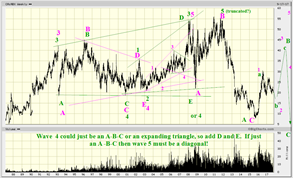 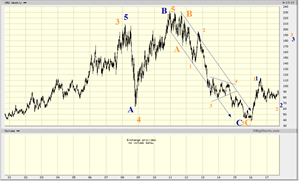 The time scales are, unfortunately a little different, ABX’s is much longer but you get the point. Just superficially I could come up with a multitude of counts, at least four in these two charts. No idea which one is the best but the one in green seems to have the most followers right now. Most importantly, apart from a slight immediate drop, the next bigger move for all of them is up not down. Playing it from the long side appears to be the way to go. For ABX it might pay to wait for $18,$17 or something like that first.

In our most recent blog we had ABX as a sell around $30. Well here we are now; 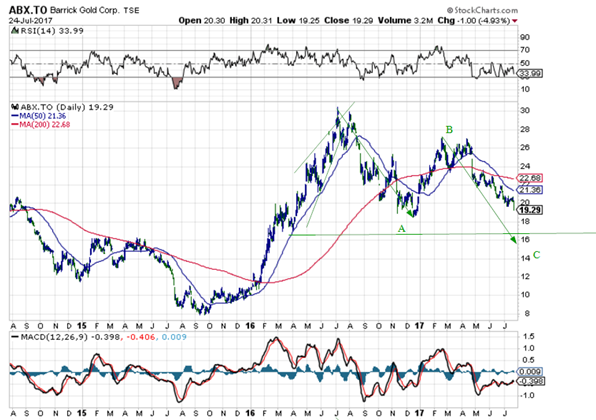 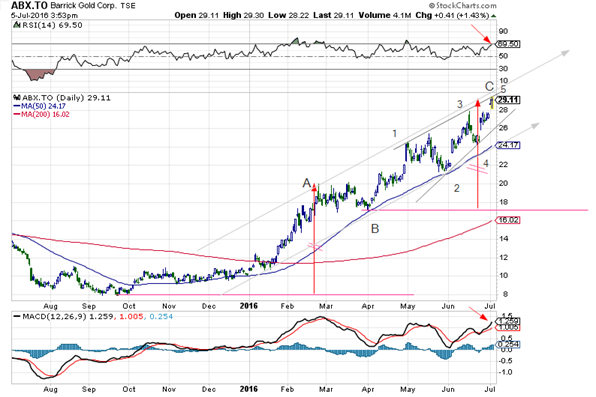 See also all previous blogs. This is one of our best calls, however there was one big mistake and that is that we expected a much deeper pullback for wave B. It just did not happen, perhaps because the world was in a hurry to get back into what they had sold only a few months ago. We are now just a few dollars shy of our target and would be inclined to sell if we still owned this stock.

Wave C is now equal to A and has taken on the shape of a diagonal, a pattern that is usually reversed to its starting point or below. There is no rational reason why this stock should have appreciated almost 4-fold with gold  at about $1360 or so. At this price gold should be well above $1500 or higher particularly in an environment where the US$ is rising. A sell.