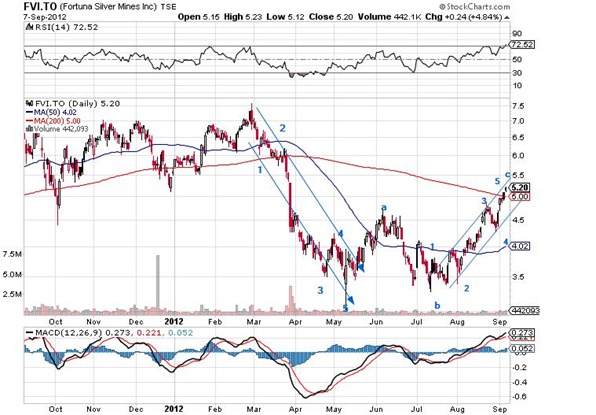 The target calculated some time ago was  $5.30, so far the high was $5.23. Coming from $3.79 that is a good enough gain. Sell. This applies by extension to a number of other junior silver miners such as PAA as well. 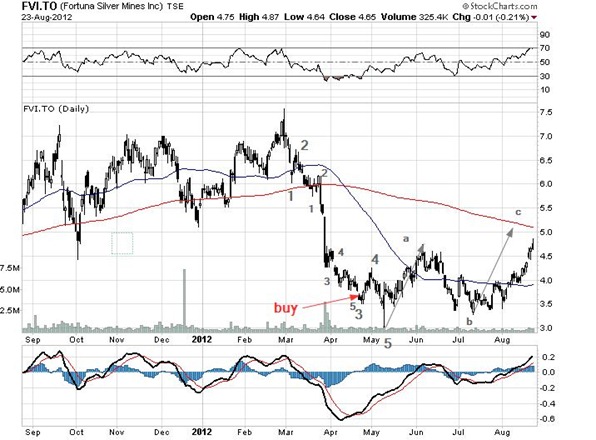 We recommended this as a buy at $3.79 despite our target of $3.50 to the downside. Patience is everything. The upside was then expected to reach about $5.30, a 60% retracement. That continues to be more or less valid even if we would prefer to get out just a little earlier, a bit above $5. That equates to a 31% gain in about 4 months. We would take that rather than hope silver may propel this stock higher. You could be looking at a much larger a-b-c in which the a is from $7.50 to $3, the b from $3 to $5+ and c to follow to close to zero. 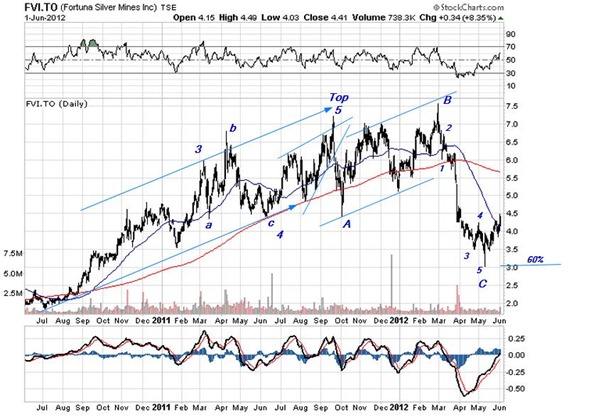 A little early (at $3.79) we thought this might be a buy with a target of about $5.30 (where it would close a gap). That target remains even if the stock slid a little lower. From $7.50 there is a clear 5 waves down. What is not clear is whether this is a C-wave as part of an (irregular) flat correction, in which case we are on our way up, or simple a first wave down after a “thrust” from a nine month long triangle (see previous blogs) In that event there is a lot more downside so we would exit at about $5 and/or use a tight stop. This stock is a good example how the juniors have traded the last little while. 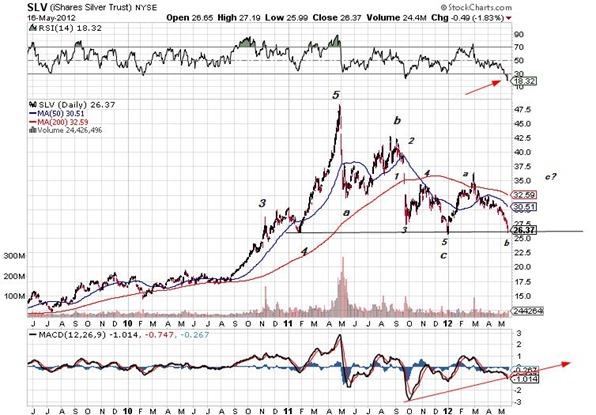 We are rather agnostic about the precious metals. The idea of buying them as a hedge against the world collapsing does not seem to be fact based. They drop together with stocks. That they constitute “real” value as in contrast to fiat money is also a little stretched. Both are highly dependent on a “mutual understanding” with respect to their value. And everyone can readily sympathise with the notion that it is a complete waste of time and money – better used elsewhere – to dig up the stuff and then bury it in a vault, why not just agree on who owns it where it is? But apart of all this it does look like silver is at a critical point here or near here. We are at a 4th wave of previous degree, a normal retracement level. It has lost 50+% of its peak value and more of the run up over the past 10 years or so. The RSI is oversold and the MACD is already pointing the other way for 1/2 year. We are aware that some EW-ers like to suggest that the whole structure is, somehow a triangle. There is no such thing to our knowledge. The count that might fit is the one shown. An initial a-b-c down followed by an a-b-c up which has yet to complete the c part. This is bullish only on an interim basis as it targets about $37. Even so it could lead to nice gains on such silver stocks that have recently been cut in half (proportionate to silvers price). FVI would be an example even though we do not recommend the juniors. A Kinross at $7.40, down from $25 is starting to look a little like value, at least relative to where it was.