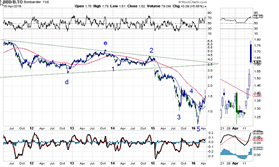 A year ago this stock looked like a buy at around $2.50. It proves the point that just because a stock has lost 90% of it’s value, it does not mean that it cannot lose another 70%. In any event the entire drop from the highs of about $25 now looks a lot like a double zig-zag in which the second a-b-c travels the same distance as the first. The spurt up from the lows looks pretty impulsive so the next serious target is around $4.50/$5 where the e wave is.

As we mentioned earlier this stock cannot go bust. It is the only Canadian company that manufactures a recognizable product, furthermore because of it’s anchor in the French culture of Quebec letting it go is tantamount to splitting the country in two. It is simple not going to happen. There is already 1 bln. set aside to help it out and there is always more where that came from. A buy for now, but short-term the stock is a little overbought. 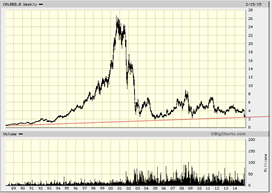 We are not entirely sure what to make of the Bigchart. We are sitting right on the the 25-year support line and are now trading below $2.50 as per the previous blog. Furthermore, the last drop from $4.35 is a decidedly clear 5-waves and the RSI is oversold. For the political reasons mentioned this should be a buy at these levels. 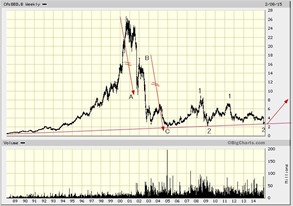 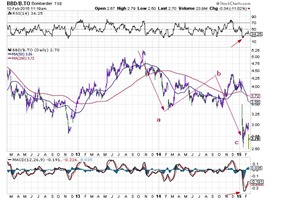 There are, reportedly, companies (as in banks) that are considered too big too fail. In Canada there is also a company too “je ne sais quoi” to fail. It is, par excellence, Bombardier. First of all it is a Quebec based, culturally French company with very few peers in its field, trains and planes. If Ottawa drops support for Bombardier it would invite succession of the belle province from the rest of Canada which would be an economic disaster, or at least that seems to be the thinking.

Secondly we used to be big, or at least on the cutting edge of technology, with our very own Arrow. That project was abandoned in a disgraceful manner under pressure of the Americans. No politician would ever want to relive that event. Psychologically it is comparable to killing your only child. It just is not going to happen.

Ergo at $2.50 from oblivion this stock has to be a buy. As it happens that is also where the 25+-year trend line runs! RSI and MACD are also signalling a turn. From an EW perspective we are not too sure but it could be a series of 1-2’s. 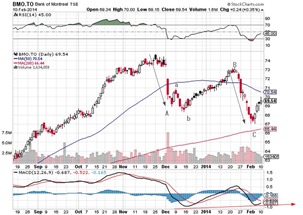 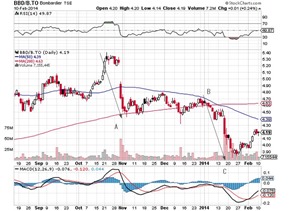 Two stocks among others that tell us to be careful in assuming that the next move is down. Without looking at anything more than just the past half year the EW signature for both the Bank of Montreal and Bombardier are decidedly bullish. What it means is that there is a possibility that this will drag on another few months if Janet Yellin is able to pull a live rabbit from a hat. Alternatively perhaps Quebec is going to succeed from Canada after all.