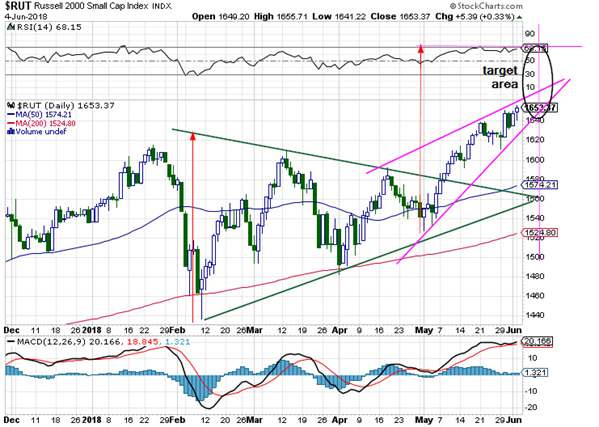 See previous blog on RUT. We are getting to the point where this thing should collapse, both as measured by time and value. 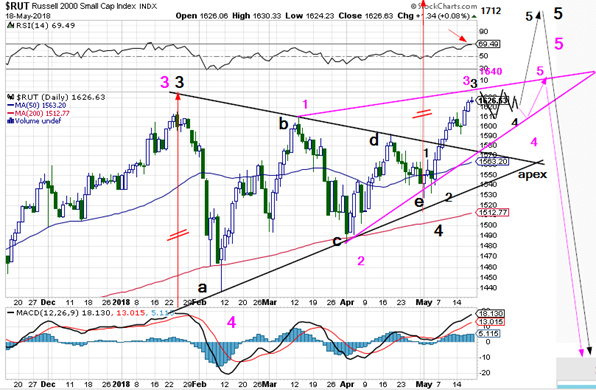 As far as triangles go, the one featured in the Russell 2000 index is closer to perfection than any of the others. The three wave nature of each and every leg within the triangle is less ambiguous and more plausible and the proportions of the sizes of the legs are pretty well classical, that is approximately 62% of the alternating preceding leg.

Assuming this is correct, at least for this index even though  any conclusions need not necessarily apply to others such as the DOW or S&P, then this pattern should terminate in less than a full month from now at least judging from the apex. A wild guess might be June the 20th. The triangle measures roughly 200 RUT points giving a target of about 1730.

Alternatively a diagonal may have started from the low of leg a, which then would be all of a 4th wave. Presently we would be in a minor wave 4 to be followed by wave 5 to complete the pattern. This could take a little longer but would not reach the same height as the upper trend line suggests a top at around 1640. This interpretation seems to be a bit far-fetched compared to the triangle proper.

Either way once completed these scenarios promise a sharp and violent reversal which you would not want to participate in. Particularly if the pink wedge actually applies, you might only have another 1 or 2 percent to go before you find yourself in the equivalent for stocks of Dante’s inferno.

The last month or two have, if anything, been most annoying. The degree of ambiguity is stunning and the ultimate resolution is probable still a few weeks away.

Then the chart on the left displays, at first blush, what looks a hell of a lot like a triangle. Today we seem to be completing wave d of that triangle. So all that is left is a small e and we could get a thrust up of about 200 points.

All legs within a triangle must be 3-wave affaires. To me it is not perfectly clear that they are. Superficially waves a and c “look” like 5-wave affairs  but there may be a small wave at the top too many. The waves b and c are unequivocally 3-waves. So it is still possible to count this as a series of 1-2s, in which case we will accelerate downward fast.

Given this uncertainty only a fool would hold a long position if you look at the big picture. There is a lot more downside than upside so you will have to be very nimble in an environment where, for all we know, Stormy Daniels may become the next attorney general. 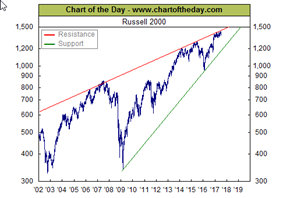 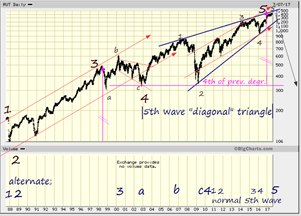 The chart on the left is, of course, from www.chartoftheday.com , readily available to anyone that subscribes, for free. Sometimes they provide you with an insight that you might not have thought of on your own. This is the chart of the Russell 2000, that is the 2000 smallest stocks taken from the Russell 3000, weighted according to the float capitalization. The median cap. size is a little less than 1bln. This makes this index hard to manipulate as there are too many stocks and few are typical “momentum” stocks like the FANG stocks. Facebook, Amazon, Netflix and Google. Arguable, it is therefore the most ‘’accurate” or “true” index.

The shape or structure of the chart is clearly that of a “diagonal triangle” to use the EW jargon. In plain English that is a wedge that gets smaller and smaller as it works its way into the corner. These occur only as a 5th wave if and when it is part of a full 5-wave sequence. That is nice to know as the chart cannot go beyond where the two boundaries intersect and more often than not the peak is reached well before that.  Also, once reached the stock/index normally retraces the entire 5th wave and does so rather violently often in just a fraction of the time it took to reach the top, here from the lows of 2003.

To put this in perspective, we have created a much longer chart, also on a semi-log scale, using Bigcharts.  It starts around 1987 which is the year in which most EWavers agree that a wave 2 occurred. From that point on we have a wave 3 and a wave 5 which is, perhaps, not quite finished. So far 5 is actually a little shorter in proportion to 3 using log terms. As a diagonal it should follow the 3-3-3-3-3 pattern which it does seem to do.  Alternatively there is no diagonal. Instead it is a normal straightforward 5th way as in a 5-3-5-3-5 pattern but starting at the lows of 2009. Either way the next big move should be back down to the level of the 4th wave of previous degree! But do not forget that  we are looking at a 14 year developing wave so the timing is more in terms of weeks or even a few months than yesterday or tomorrow.

The “too good to be true” test certainly does seem to support the notion that some big correction should happen soon. 5 times your money in the eight years since the great recession lows certainly fits that criterion if you ask me.

If you draw the trend channel properly, the 2009 point as the start of a normal 5th wave makes slightly more sense. It also suggests that we are pretty close to topping. 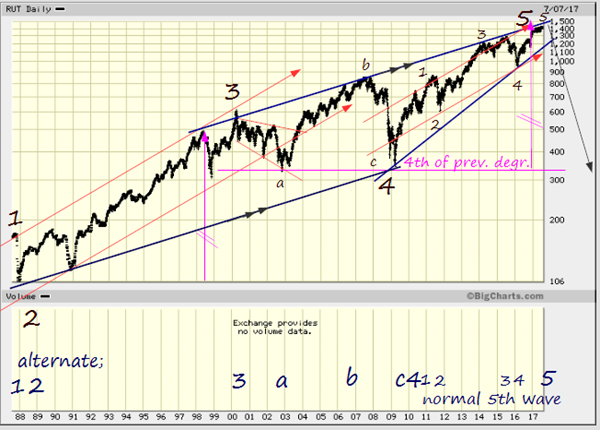