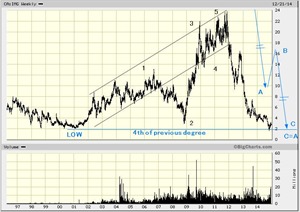 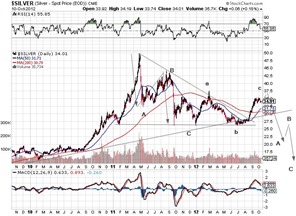 We have two charts here, on the left today’s chart of IMG and on the right the chart of silver, the stuff, from October 2012, now more than two years ago. Starting with silver, at the time we assumed a double zig-zag correction was forming. Whether or not that was correct matters less than that the target of about $15 has been dead on so far even if it , arguable, took a bit longer than expected.

IMG is interesting in that it has done ALL the basic things one would expect. It is one big a-b-c correction so 1. expect it to go to the 4th wave of previous degree, 2. expect c to equal a give or take, and 3. expect the end result to be horrific.  We have them all here so possible this is one precious metals stock that has completed it’s decline. There are many that are close to what we expect to be a bottom and they are simple not going to do it all at once. Others in this league are CFE.A, Central Fund, KGI , Kirkland , ABX almost and so on. If betting on a single stock is not your cup of tee, the ZJG, BMO’s Junior Goldstock Index ETF could be a good choice. It is trading at 1/5 of its peak value and may have completed the correction, if not it only needs one quick move below $5. Both the RSI and MACD seem to be smiling already. 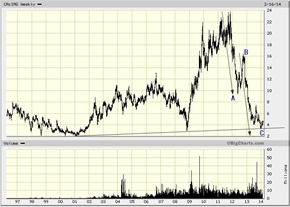 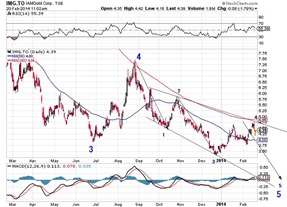 See also previous blogs. This stock looked like a buy months age. It was but barely. Looking at it again, an argument can be made that the 5th wave (of  C in an A-B-C correction) is not yet complete. There is some overlap but that is acceptable in a diagonal. Wave 3 cannot be the shortest and as it is already shorter than wave 1, wave 5 cannot drop below $2.25. That is also where waves C and A are equal. Time will tell. 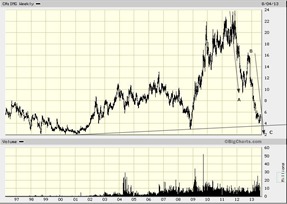 This is a little superfluous, using two charts, but it illustrates the point that you can prove almost anything  and that depending on the chart, monthly, daily, hi-low or close etc.etc. the outcomes can differ tremendously. We have toyed with the idea that this might be a buy, see previous blogs. It sports a dividend of nearly 5% and a p/e that is very seductive at 8.6X, at least according to the folks at big chart.  The EW structure is a clear zig-zag A – B – C down in which C is almost equal to A (not quite on Bigcharts, but already so on Globe+Mail chart). Presently we are sitting just above or just below the line connecting the lows and with a low of $4 coming from $23 in about a year and a half, there is no doubt that this stock experienced a bear market like few others. Provided there is nothing fundamentally wrong with this company, and we are not aware of anything, this one SHOULD be a buy on the basis of buy-low-sell-high. This would most certainly be the case if the stock approaches $2. 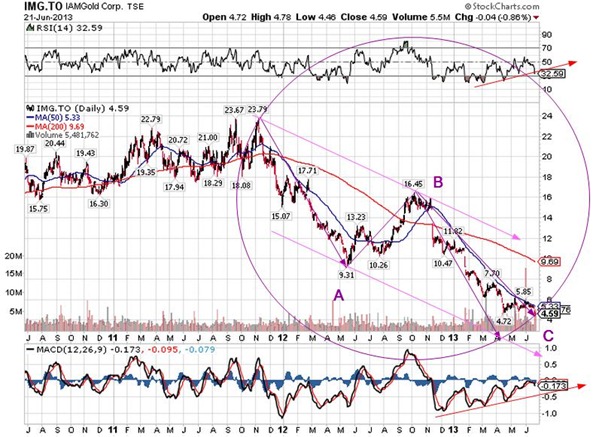 A few months ago at about $8.50 this stock looked as if it might have been a buy. It wasn’t, but here again things are looking a lot brighter. The two legs down A and C are presently vector equal. Both the RSI and MACD are pointing up and the stock yields 5.6% and trades at a p/e of 7. Looking at the big picture, the stock has now dropped close to the lows of the 4th wave of previous degree (at $3 ?), see below. 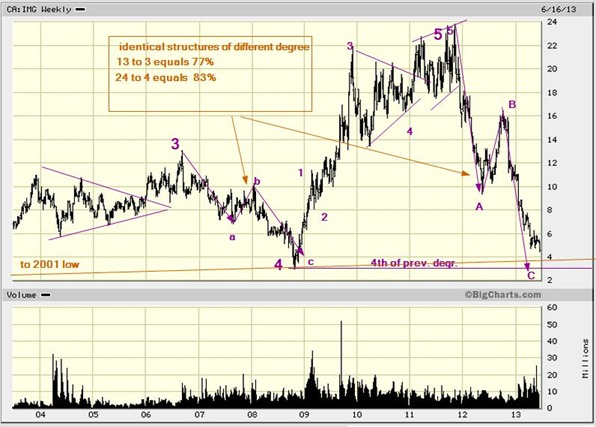 Just under $4 you hit the line from the lows going back to 2001. If it goes there or even a little lower remains to be seen, but regardless, it is already pretty obvious that buying at $4 beats buying at $24. This is what is known as buying low and selling high (as we suggested, see many blogs ago), it is what almost nobody ever does, it is that difficult..