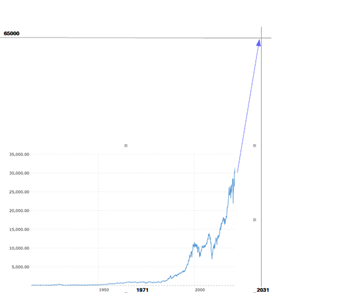 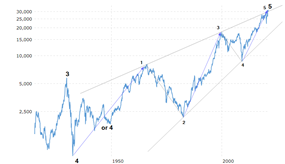 Dow 65000 in 2031 sounds pretty optimistic. Some of you may remember this book by James Glassman and Kevin Hassett  published in 1999 and called, simple, Dow 36000. This level in the Dow was supposed to be achieved by 2004 at the latest. Their principle argument was that stocks did not deserve/need an extra risk premium above that of fixed income securities and without that additional premium stocks could shoot up from about 10000 on the Dow to 36000. ( If for some reason the name Hassett vaguely rings a bell it may be because this fellow was a Senior Advisor to President Trump and Chairman of the Council of Economic Advisors. He is an economist by trade and always smiles, which is very unusual for anyone in this dismal science.)

Needless to say the prediction did not come true, in fact now 22 years later we are still short 5000 or so Dow points. This was obviously some sort of publicity stunt but it did work as an attention getting device. But when you think back and wonder if you would have been better off discarding this book as utter nonsense or accepting its premises in a broad brush sense, you may find that you would have been better off in the latter case. So now that we are here, near their target, what could we expect in the future if we are optimistic, very optimistic.

First one would have to determine what “causes” the Dow, or any other index, to rise. Actually from the highs of 6000 in 1929 to about 1992 the Dow never sustainable exceeded 6000, that is a period of 60+ years or a lifetime. You cannot therefore blame our fathers (or grandfathers if you are very young) for being coupon clippers rather than stock traders. In fact if real assets and financial assets are to command the same (zero?) risk premium it follows that the stock market cannot go any higher in a competitive economic environment. To go higher you must be able to debase the financial asset (money) relative to the real asset (stocks). Perhaps for this reason the really significant point in time when things changed was when President Nixon (tricky dick) temporarily halted the convertibility of the US dollar into gold – a real asset –  on the 15th of August 1971. With that the entire Bretton Woods financial construct collapsed and now we can only trust the government and we know with certainty that we can trust it to overspend and over borrow at every opportunity. Starting with the cost of the Vietnam war, the Savings and Loan debacle,The Long Term Credit fiasco, Y2k, 9/11, the Great recession, Covid-19 1 and 2 and certainly more to come, there is never a reason not to throw money at a problem. It is a Ponzi scheme.    So from 1971 to now the index moved from about 900 to 31000 in 50 years. That is a growth rate of 7.14% (not including dividends). If we keep up this exponential rate for another 10 years we will reach about 65000 on the Dow. I have drawn that move into the chart. So to surmise, it took a full century to get to 1000, then about 50 years to add 30000 points and now 10 years to add another 30000 points.

That is not going to happen. The chart on the right shows the same Dow, however inflation-adjusted and on a semi-log scale. It is an exceptionally beautiful “diagonal triangle” or, in English, a wedge. These are always ending structures as they only occur in 5th wave positions. In this interpretation this whole wave from the lows of the depression is one 5th wave. It is about to turn and should retrace entirely which is to say drop back to the depression lows. Is that dismal enough for this economist? 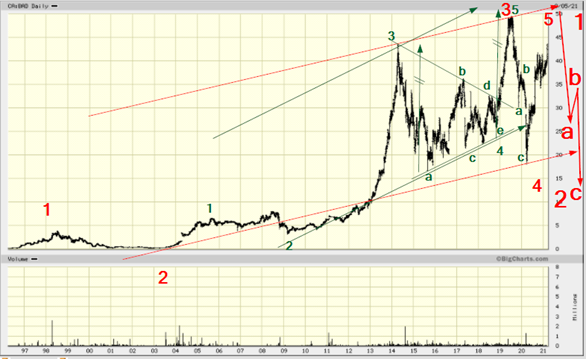 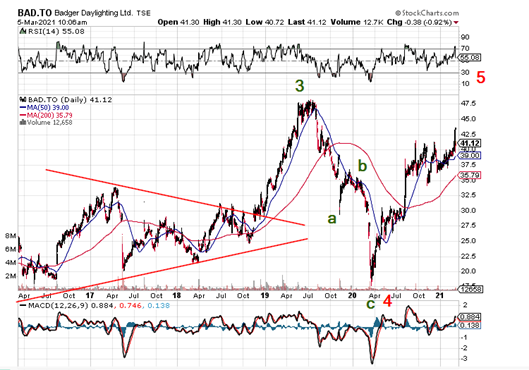 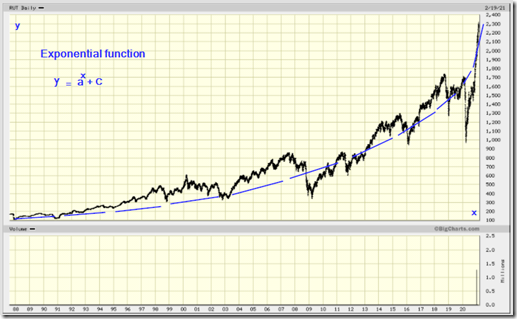 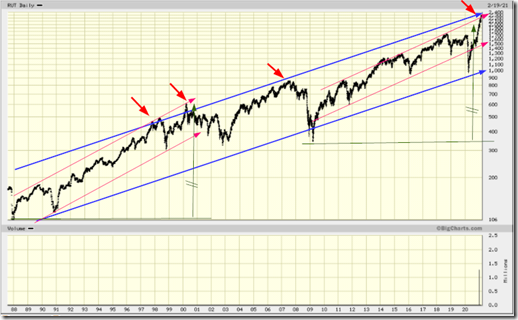 This is the same chart as the one on IWM a little while ago. The Russell 2000 is displaying an exponential function which, put simple means that you start horizontally and end going vertically, straight up. On a semi-log scale it becomes a straight line in which the angle of attack is a function of the variables relative size on the x and y axis.

We have hit the upper trend line 4 times over the past 40+ years. Each time the index reverses and loses about 1/2 of its value.  This is of course a very crude measure, certainly in terms of timing but it does strongly suggest that exiting this market is the most sensible thing to do. Keep in mind that this index climbed some 1300 points in the recent 9 months. That is a rate of 1700 points roughly in a year. It took an entire lifetime to get to that level before!

I would now sell both Royal Dutch RDS.b and General Electric. Both have roughly doubled over the past year. They could go higher but this was the “sure” part if there is such a thing. 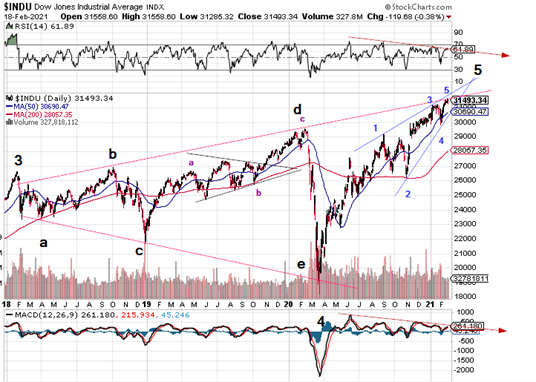 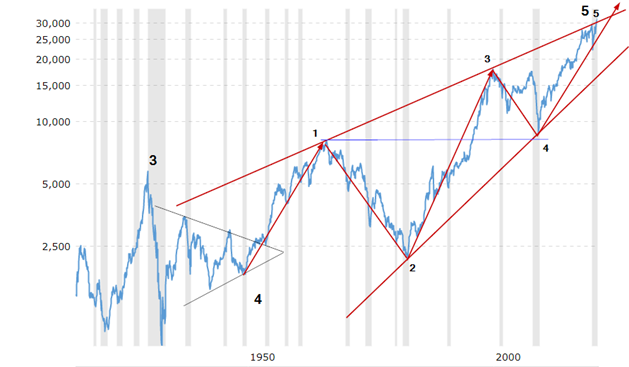 We may have peaked about a week or so ago on the Dow, see my previous blog.

This is all predicated on the idea of a diagonal triangle 5th wave, all the way from the lows of the 1929 depression (or, if a triangle in the post WW2 lows of 1947 or so). Each leg does not need to be a 5-wave affaire in this scenario. Note that both the RSI and MACD have been dropping for quite some time. Also, the ten year US bond yield doubled in the past few months and that may well be the Achilles heel of this financial Alice in Wonderland that we are living in.