We have had some misgivings about the use of a “technology” company in a credit union, see our blog of Sept. 1, 2015, one that was missed by the defamation suit that was launched at about that time against me. The suit, by the way, is perhaps still operational despite the fact that the instigators have not lived up to their commitments.

In that blog I estimated that Zenbanx would loose another $5 mln. by year-end 2015. I was again too optimistic as the actual loss turned out to be $6.6 mln. for the last 6 months of 2015. See below; 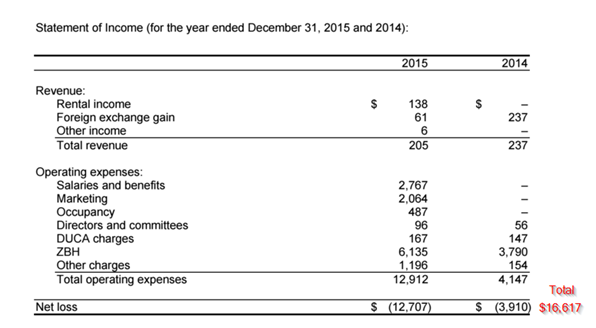 The total since inception mid 2014 is now $16.617 mln. but that does not include certain managerial and professional expenses that were born by the parent and conservatively are in the order of another 1.5 mln. or so. What little revenue there was comes from, of all things, foreign exchange translations and rentals. Payroll, occupancy and governance are now well over 3 mln. a year. Little wonder then that the credit union is looking to “renegotiate” the deal with ZBH. Unfortunately that will not be as easy as it was in the past as the two Senechals have been reduced to one, no doubt after a “golden handshake”.

A particular paragraph, under “related party transactions” on page 36 caught our attention;

First of all, we the members, did not even know that there were board directors at ZBC. It was  mentioned in passing at the last AUM but you would have had to listen very carefully. The board members, at least those that were named are Ralph Kikkert, Marijke Kanters, Jennifer Visser and Angela Pollard. The person the statement refers to is of course now ex-Vice-chair Angela Pollard or, more precisely, Pollard and Associates which company was petitioned at the court by the credit union in stead of Collins Barrow, well before she herself stepped down. Not only did that result into “billings” of a few hundred thousand dollars but now there is an additional $96,000 to share between the four of them. The concept of appointed directors is alive and well despite the regulators earlier strong objections and clear prohibitions against professional people holding office within a certain time period in the Credit Union Act.

Before this whole affair is over and done with we would estimate that the financial damage of this predictable unwise experiment will be around $25 mln.  Even at 60% that is twice the self proclaimed catastrophic event that was mentioned in the offering memo for the B share issue and this one is, for the most part, not tax-deductible. No statement of material change was ever issued even though these developments were blatantly obvious starting from mid-year 2015. More on that some other time. 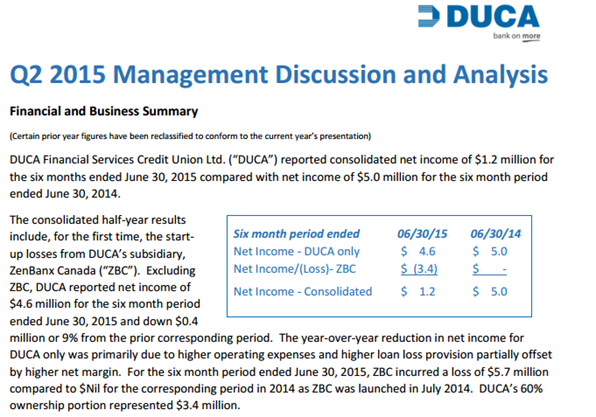 This is an extract from the mid-year “Management Discussion and Analysis”.  You will be disappointed if you expected either a discussion or an analysis. The same report last year was also fairly brief but the year before that it was 17 pages rather than the present 4. As they say in Dutch, what the heart is full of, the mouth flows over with. Apparently the zenith in optimism has long past Duca.

Last year, Dec 31, 2014 ZBC that was capitalized at $10 mln. recorded a loss of $3.910 mln. This year, for the first 6 months it was 5.7 mln. Since inception ZBC has lost $9.61 mln. Duca’s share at 60% is roughly 5.8mln. The equity left in the joint venture is just a few hundred thousand dollars, presumable barely enough at today’s burnrate to meet payroll requirements for the remainder of the year. No problem as the former Vice Chair of Duca’s board, who is now on ZBC’s board, unelected, can call, per contract and at her pleasure, on both Duca and ZBH for additional capital infusions as needed, much like the proverbial tail wagging the dog. This is not all. Duca owns a few million dollars worth of shares in the US partner ZBH (Holdings) as an investment. Why Duca has this equity position has not been explained anywhere. Already, at last year end, a loss of 1.2 mln. had been recorded. No mention of the present value. Admin cost have been running unusually high and it is not that difficult to infer that at least 1 mln. was spent on ZBC. This is what we know, not what we do not know, but that brings us to a total of 8 mln. for Duca in just one single year.

Little information has been provided concerning the arrangement with ZBH. Our understanding is that both parties can cancel the deal after only two years. Should that happen Duca will have helped ZBH to the tune of 15 mln. or so and have little to show for it as the “brand” is not theirs. This is every investment advisors secret goal, that is to make your money and my experience into my money and your experience.

Sales are not moving along as fast as Duca would have liked. Despite all hands on deck to flog the stuff only about 1/2 of the first 1000 clients/members eligible (not by the offering memo!) for the 1% cash rebate have stepped forward. The same seems to be true for the FX services ZBC is to provide. So far not even a glimmer of hope has been presented on this score despite the two to three months that have passed since the launch. When the phone goes, just say “no thank you”.

P.S. The argument has been advanced , as is the case also in this mid-year report, that the losses are “start-up costs” and that give or take 10 mln. is not a bad price to pay for a whole new franchise that will propel Duca forward for years. However, that all this was somehow anticipated and planned does not sit well with the fact that last year’s mid-year report contains not a single reference to this adventure which had already been in the making for quite some time.

When I started my computer this morning one of the first things that popped up was the above advertisement. ZenBanx is the majority owned subsidiary of Duca , the Dutch/Canadian credit union. This new enterprise is going to give them growth, lets take a look.

To keep the math simple lets assume that the exchange rate is .80 or 1.25, which would imply that it would cost 250 x 1.25 = C$312 but as they promise to do this at par they receive only C$250 so they lose C$62. But they do charge about C$6 per transaction, so on a net basis they will go in the hole C$56 for each and every transaction. This is on top of the millions squandered to get the whole thing going.

The question now is, is this an absolutely brilliant marketing ploy that is going to grab the attention of the world at a relatively low cost, or is this a completely stupid and irresponsible idea that is going to help bring Duca to it’s knees. Time will tell but I would not bet my Duca bonus shares.