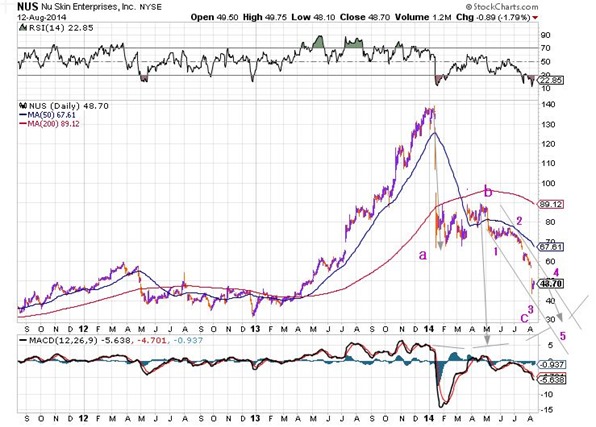 Back in January we opined that this stock should drop to $30 as a minimum, based on the level of the 4th wave of previous degree. So far so good. The RSI is very overbought so a bit of a bounce right here should not come as a surprise but this one has further to go. $30, as a minimum , still makes sense. (See also previous blog). 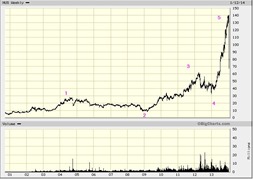 Same chart, one is just a little bit longer. I am reasonable familiar with the company if not the stock. Back in the early nineties a good friend of mine asked me to join him in selling the product. I declined on the grounds that I thought the business model resembled a Ponzi scheme or some form of multi-level merchandising. It was amazing how cult-like this guy reacted with almost the same indignation as you might get from Amish shunning. That was the end of that friendship.

After that the stock apparently dropped to about $4 (almost 90%), only to regain its lustre and climb to an incredible $140. Then it drops 50% supposedly on news that the Chinese are looking into this company’s operations. If you Google it you will find dozens of references to the effect that it is a Ponzi scheme, not the least of which are comments from Citron, a well known short selling outfit run by Andrew Left.

The question now is why would anybody of a sane mind buy this stock at $139 knowing all that? Part of the answer can be found in how the financial industry slices and dices all the information to come up with a warm recommendation. Here is one from the Globe and Mail. 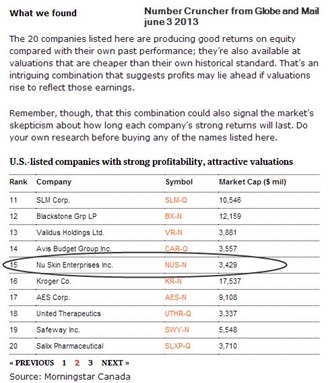 NUS is number 15 out of 20 using this particular filter which compares the company metrics to itself at an earlier date which essentially assures that the stock is more attractive as it climbs more parabolically. The other part is that a ponzi scheme is entirely dependent on growth and can continue almost forever un till some exogenous factor throws the proverbial monkey wrench in the wheels, in this case the Chinese  investigation. That NUS’ performance has not raised eyebrows is in no small way explained by the fact that, when you think about it, the entire market has become an immense Ponzi scheme orchestrated by none other than the Federal Reserve. Should Janet Yellen drop the baton for whatever reason, NUS may just be telling us what to expect. Our target for NUS using EW would be the 4th wave of previous degree, about $30. That is a minimum.