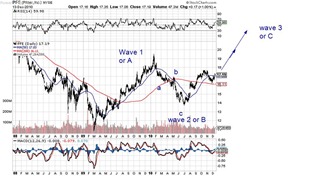 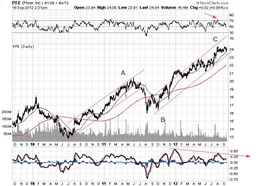 There are various blogs in between advising exiting the position and, in contradiction to that, waiting for targets at $24 and $28 (all are in the archives). You are up about 40% if you held on to this stock from Dec. 10 onwards. Now that things are a little clearer we would prefer the A-B-C count as opposed to the 1-2-3-4-5 possibility. The two legs are roughly equal in size if not in an absolute sense than proportionately and both the RSI and MACD have been turning down for some time.  The same holds for BAX, Baxter. 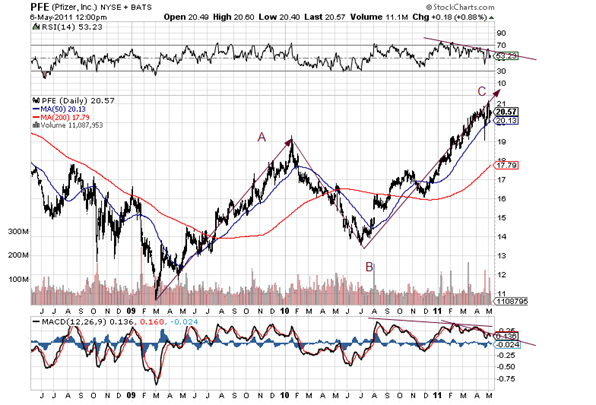 We have been anticipating a move , possible to as high as $22. On this semi-log scale chart the a-b-c is almost perfectly symmetric and we would exit the stock. 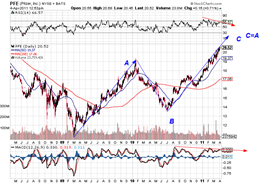 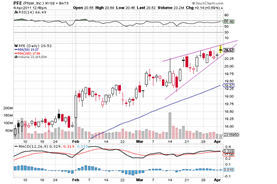 Getting a little nervous about Pfizer. It is sporting a nice wedge in the short-term chart AND is only a little more than a dollar away from a very nice symmetric a-b-c. I would step aside at the next high. 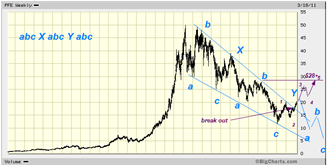 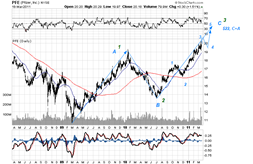 We have been bullish for some time now, if for no other reason that after 10+ years of going down odds  would seem to favor a bounce, at the very least. Now the stock is reportedly about to fall of the patent cliff, particularly with lipitor moving down to the pedestrian level. But they did buy Wyeth for that reason , so who knows.

In terms of EW the stock appears to have completed an abc X abc correction. From that low it is either in a new bull market or doing a Y in preparation of another abc. (3 abc’s is the maximum!). We simple do not know! What we do know is that if it a Y, it is likely to be nicely symmetric which would occur at about $22 . If it goes further, up to $28 it could be either situation and beyond that it is a real bull. We will keep an eye on it, but for the time being it should be up.