Three weeks ago it seemed that cutting out of YLO would be a bit like throwing away the baby with the bathwater. At the time it had reached a low at $2.04. Just a few days ago it bettered that low by a few ticks by reaching $1.99 Even then it looked like a 5 wave sequence was complete and that may still be the case, but with this additional low it looks even more credible. Here is the chart then and now; 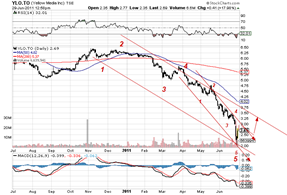 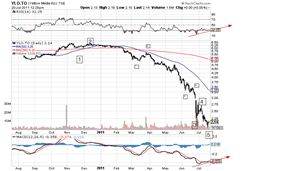 The bounce back to about $3.50 has not (yet) occurred but in the meantime nothing is lost either. The stock now yields 30.39% at its current level of distribution/dividend. The P/E is 4.28. For those that adhere to the tenets of Graham & Dodd with respect to value investing, it does not get much better. After all they explain in “Security Analysis” how the market has a tendency to irrationally under-value certain out of favor stocks and how a savvy person (like you) can benefit. Here are the facts according to Bigcharts;

In the meantime according to mr. M White at Signature Global Advisors there is presently an open  short position of about 85 mln. shares or 15% of the outstanding stock which he has at only 520 mln. (525mln according to the company’s website). The average daily trade volume was about 4.7mln shares so it would take 18 days to wash out the shorts.Then of course there is the matter of the sale of one of their publications ,Auto Trader , for about $745, which for now at least has a good chance of going through. Using his share number of 520 that is $1.43 a share.

According to that same website (ylo.com) the enterprise value is around 5.26bln., debt is around 2.14bln. Revenue is about 1.4bln and revenue from the internet are growing at 38%. The commercial paper rating by DBRS is R-1 low. The way I see it the earlier mentioned target of $3.50 (as a minimum) is plausible, credible and both fundamentally and EW-wise entirely reasonable. 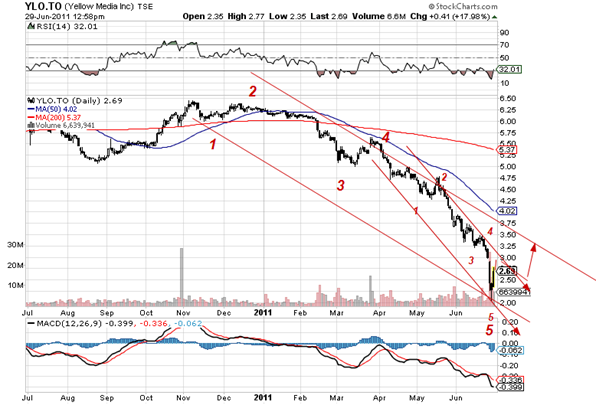 Further to our yesterday’s comments, apparently the “reason” for the spontaneous combustion over the last few days is an analyst repost from a Swiss bank. Why people read these is not clear but the end result has been that this was the most active stock on the TSE for a few days in a row. Today the stock, not surprisingly is up almost 20% (to gat the same return you have to sit on your Gov. of Canada bond for seven years!

Counting this thing there is reason to believe that yesterdays low around $2 constitutes a major intermediate low if not THE low. The 5th wave is extended so a return to about $3.50 is a definite possibility. 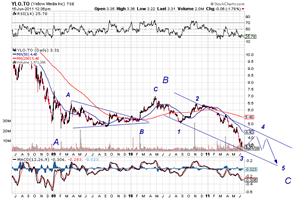 Less than two weeks ago we warned that this stock was in danger of falling off a cliff. The idea that provided the yield is so high that it will offset any capital losses stopped clearly stopped working. Here is today’s chart; 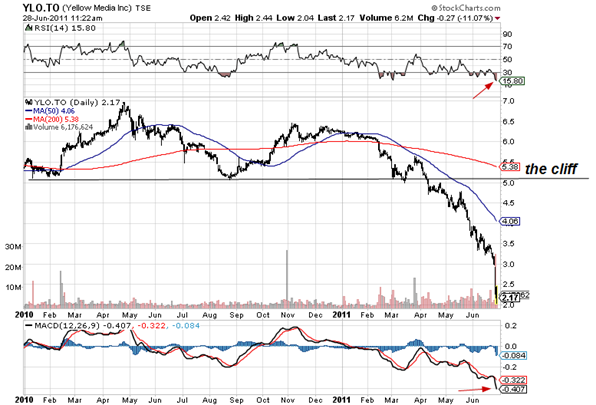 The decline accelerated. The stock was at $16back in 2006. This is supposedly Canada’s largest internet stock.It seems that the reality is becoming more obvious, nobody is letting “their fingers do the walking” if they can have Google do it for them.

Count wise it is well possible that the low today around $2 will be it for a little while ,so it may not be a good move to through the baby out with the bath water now.  A stop at the cliff line, or slightly below would have done wonders. They do not cost anything! 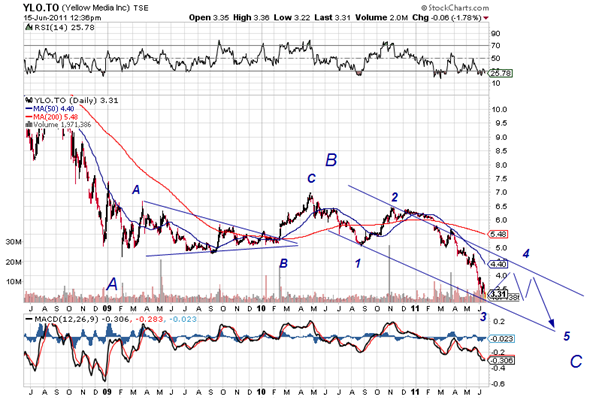 Clearly this one is in trouble. Frankly you should have been stopped out at about $5 which represents the bottom of the consolidation range. We may get a rebound of a dollar or a little more which would present a good exit point if you still own it. The younger generation simple does not use the Yellow Pages anymore and even if this is supposedly Canada’s largest internet company, it simple is not changing the business model fast enough.