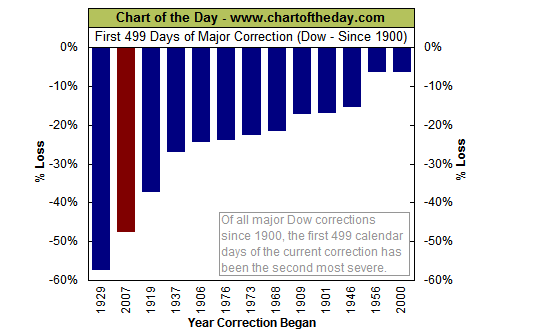 Courtesy Chart of the Day, free to anyone that likes these things. This correction is still running behind 1929. R . Prechter of EW fame and Ian Gordon of the Kondratief Cycle school are among the few to predict that this correction would be worse. Of course the detractors will argue that these guys are perma-bears and that they have predicted this a hundred times before and that consequently they would (remains to be seen)be right some time. This is not factually correct as these bears (including moi même) are often bullish and almost always contarian.  In any event we now have Paul Volcker suggesting that this one will rival 1929, now that is an authority worth listening to.

This is the UBS AG chart. From $60 to $10 in less than 2 years. More trouble lies ahead as their franchise, par excellence, bank secrecy,  is starting to fray at the edges. The US revenue service may get their hands on 25000 names of tax evaders. If they get their way all tax collectors around the world  will be standing in line to get their list. Of course Germany already got info from Lichtenstein or one of those little havens. Very embarrassing for all concerned, especially if you are a high ranking politician. The amounts involved are large, very large both on the other side of the pond as well as in the Americas.

In this context it is heartwarming to see how naive Canada is. Any suggestion that these sinister activities are happening here is received with total disbelief , after all we all know that the plane loads of bankers from Geneva etc.  are here to service Nestle, Alusuisse, Oerlikon and a few other companies. But then Canada was the last western nation to do away with the $1000 note, the currency of choice for these activities.