According to Shadow Stats the unemployment rate is presently about 18%, this is after the adjustments that have made by the BLS (Bureau of Labor Stats.) over the past ten years or so. Discouraged , or under- employed people are simple ignored under the new methodology leading to significantly lower numbers than would otherwise be the case. This applies to other â€œstatsâ€ like inflation, money supply etc.etc. Considering , moreover ,that at 2-3% of the population, the US has by far the highest proportion of their citizens behind bars, somewhere in the order of 10x as much as other civilized countries. As this costs more then sending them to Harvard the cost to the overall economy from unemployment and incarcerations is considerable. The unemployment rate at the peak of the depression was 25%, so on the positive side we are not that far off. 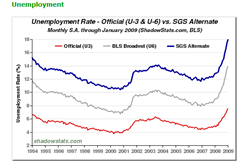