Back on Jan 27 (you can look it up) I suggested Bank of America would be a buy at $5 or less. It got down to $2.50 or something like that , but suppose you had bought it at $5, then under my little rule you would sell $6.50 as that represents a 30% gain (I do not use â€œautomaticâ€ stop losses). It traded above that so you should be out , but I have little doubt that that is not the case. Nobody follows rules and that is perhaps not a bad thing, it is up to you what rule you set for yourself, what counts is that you have one. Here is the chart.

It is certainly possible that this one goes to $7.50 , and perhaps much further. It is after all too big to fail and now that central bankers actually take it upon themselves to talk up the markets, who knows.

Bank of Italy , as it used to be called , has taught me lots in the 5 years or so that I was there, first as a credit officer, then as one of two in their Global Treasury Management group, a consulting outfit very much like McKinsey & Co without the BS. BAC almost went bankrupt just after I joined. Here is the chart. 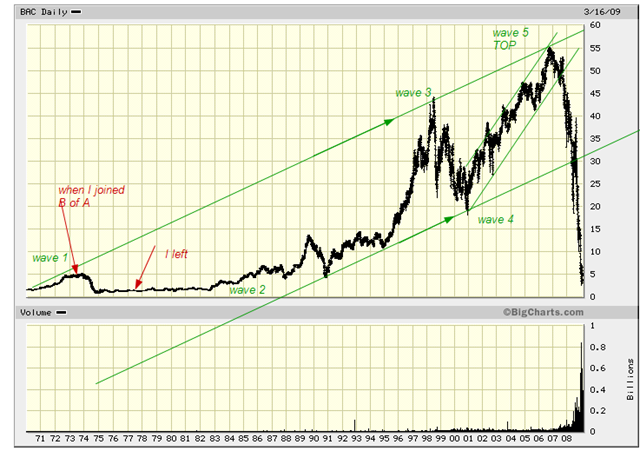 The little red arrow is when I joined, the next one when I left. So what does that look like in more detail? 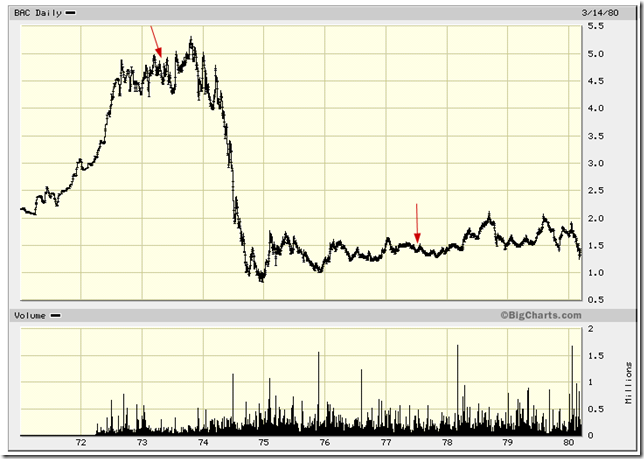 Not that much different from what it has just done, losing about 85%, instead of 95%. More to the point, it took years to get back on its feet! So what is the moral of this story.?

1. There is nothing knew under the sun – so forget about â€œthis time is differentâ€- if you have not seen it you probable have not  looked  well enough.

2. Black Swans know where you live and will more often than not visit  you twice in a life-time even if the â€œprobabilityâ€ of that happening is 1 in 10 billion.

3. The difference between being filthy rich and just getting by is not always smarts as much as luck, as the alumni of A.E. Ames and other such venerable and distinguished â€œfirmsâ€ can tell you.

4.  On second thought, maybe silly little rules are good after all. ! Make your own if you wish but stick to them.