It was in the Toronto Star this morning, all our economic problems can be blamed on the Gaussian Copula. If you are like me and do not remember what that is , other than a little box on a roof with a wind vane on it, here it is from Wikepedia.

So what this obviously tells you ( 64 trillion worth of financial derivatives are priced on it), is that as long as you stay more or less in the middle of the road everything works as it should, however, as soon as you hit the gravel shoulder you are totally out of control.  Explained in simple terms, the chance of getting the plague is 1 in 10, the chance of starving is 1 in 10 and the chance getting shot is 1 in 10. The chance of all 3 happening is therefore 1/10×1/10×1/10=  1/1000 (which is true in the middle of the road). This assumes a covariance of â€“1, in other words none. In reality this would only happen in wartime exactly when these things tend to happen in threes (when you are on the gravel shoulder) and the odds of all three happening might be 1/100 which means that the math underestimates the actual risk by a factor of 10X, on 64+ trillion this can become a problem! Which leads to todayâ€™s Fed action, the buying of 300 bln longer term securities on top of the 700 bln mortgages already announced. By messing directly in the securities market the Fed is attempting to suspend economic rules. Granted these differ from physics in that at least for a little while it can be done, whereas the Fed has as yet not found a way to make water flow uphill. Here is the long bond chart courtesy St. Louis Fed.

After the announcement the 10 year dropped 50 beeps putting it back at near the lows of the above chart. On the 30 year it was about 40 b.p. and looks like this; 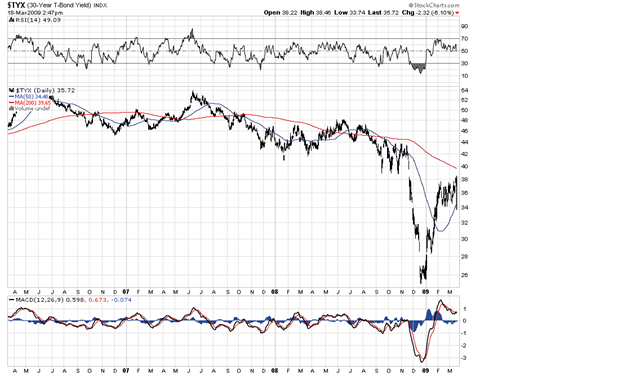 The yield dropped from about 3.8% to 3.4% The last time long rates were artificially capped, I believe, was in the 5/10 years following the war, so from 1945 t0 1955 or so. Then the US was able to ration just about everything while the economy transitioned to peacetime. Also the US was for most practical purposes a closed economy. Either they will try to replicate those circumstances or it will soon become very clear that this does not work. Either way it seems to me high time to get out of long bonds. By the way, as all things have a PV, present value, it is worth noting that this SINGLE MOST IMPORTANT FACTOR determining the economic value of just about everything is the discount rate. From 15.5% to 2.5% everything became 2.55X as valuable. Were we someday to move back to the average of say 7%, that alone would take the stock markets down by 35% (assuming earnings stay the same!). All this with a CPI at 0.4% per month.