Holland has a number of advantages when you study economics there. Much of history has actually happened there, for instance the first company to operate on a shareholder basis was the Oost Indie Compagnie , founded around 1604. Shipping then was highly entrepreneurial as many a ship never returned, but the rewards from the spice trade were very high. There was already in the mid 1600s a well functioning cherry futures market with 36 fungible varieties, privileges , options and the whole works. Nothing under the sun is new

Also the University of Amsterdam , my Alma Mater,happens to be located dead smack in an area known as the â€œWalletjesâ€, the same word that is embedded in Wallstreet  (wall = embankment , quayside , shore-line etc.) The area is also known as the Red light district and I have always thought it instructive to see that  two so very different professions can thrive on a similar base. Here is the chart: 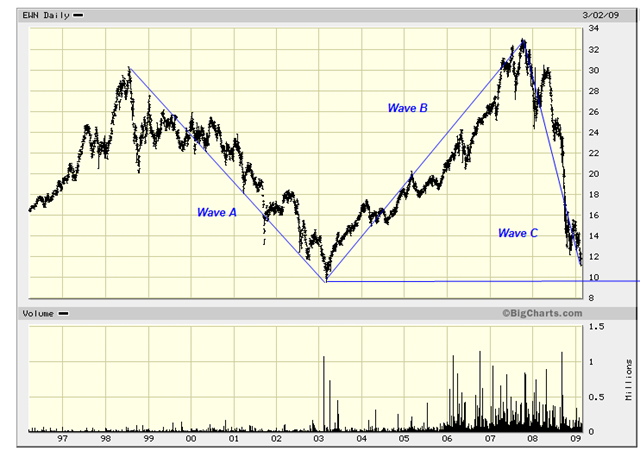 The Dutch exchange has a disproportionate number of multi-nationals and financial or insurance companies and consequently has recently been behaving as a high beta market. As a result it shows this whole 10 year correction quite well. The low is about 9.75 and the high 33. We are approaching the low again and if and when we do this one has a 10 point rebound built into it. (Note that here too we have a double-top albeit a very sloppy one as the second high is a little higher than the first, B is irregular).