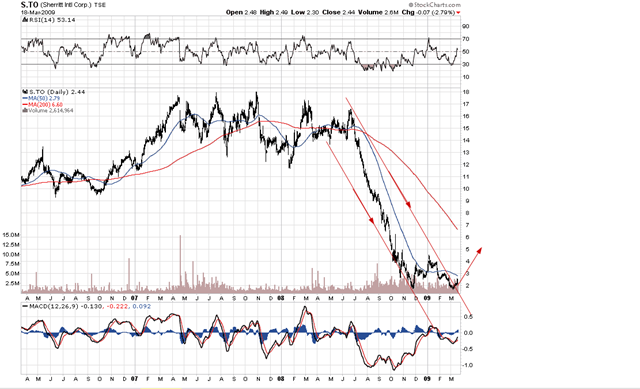 Sherritt had 5 â€“waves down into the low, should imply that it should go back to $5 or higher, perhaps much higher. This company is ( was?) run  by the ex CEO of Merryll Canada, his wife is a mutual fund manager and both are persona non grata in the USofA, all on account of doing business with the enemy. Never mind that â€œgitmoâ€ is right there, while Fidel is technically all but dead and the USSR equally of no consequence.  Remember â€œour man in Havanaâ€, the vacuum cleaner salesman, Ernest Hemingway and his â€œold man and the seaâ€ and the â€œBay of Pigsâ€debacle that embarrassed  Kennedy so much and now all but forgotten, and all that other good stuff?  Not that long ago this was for Americans what Mallorca is for the Swedes. A place to drown your sorrows and engage in some serious mischief while you could  still walk. These times are going to come back, at least in the next 5 years the embargo against this island will be lifted, the economies are going to improve dramatically and Sherritt will stand out as THE company to have seen all this coming. The chart even looks good, for a little while at least.