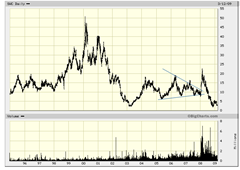 Stillwater has been a great trading stock. The Russians own it, it is situated in the Montana mountains, they dig up platinum and they are certified green, that is they do not make a habit of pouring arsenic into the local rivers. Platinum is a precious metal but for some reason has never gotten on womenâ€™s radar screen even though it is more expensive than gold. It is an industrial metal used to make catalytic convertors for the exhaust systems for cars (think green). Now we know that the car industry is going to hell in a hand basket but that is really only here in N-America, the Chinese just bought more cars than the Americans! Convertors are also used in woodstoves and other such â€œburnâ€devices.

Here is the detail; 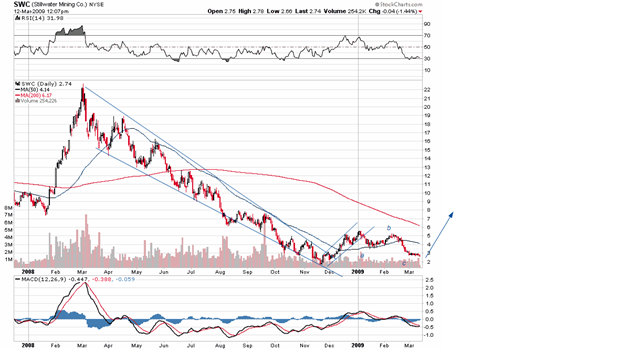 Last time I bought some at $8 thinking the low was in (it was not but I always aim for 2 chances). This time we know the low had a $2 handle so we wont be making that big an error. What is attractive is that the first leg up from the low is an unmistakable 5 â€“wave affaire. It is then retraced almost 100% in a second wave so now we should get 3 or at least C.