One would intuitively expect diversification to work better over a greater distance, like from Canada to Australia. Not so in this example as language, common heritage, natural resource dependence and a few other factors conspire to make the two economies, at least their stock exchanges, operate in an almost identical fashion. Here are the charts of the TSE and the AORD.

Notice that the TSE, the top one, starts later and therefore misses a wave that the AORD does have; otherwise the two are more or less identical. Something is distorting these indexes to cause this difference, perhaps capital weights, total return , whatever is responsible. To avoid this we will use the EWC and EWA iShares instead. Here they are. 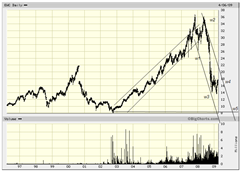 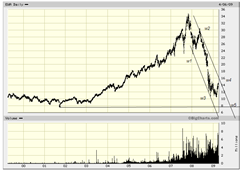 Both iShares are pretty well identical having lost about the same proportion and doing it in synch. Both also suggest a 5th wave is missing to take them to their logical targets! In the future we will avoid the TSE index and use the iShare instead.