On Feb . 18 I opined that cat should drop to about $26 and then rise back to $47 or so. Similar comments were made with regard to DE and Canadian Western Bank, the one that finances all things yellow that smell of diesel. Here is the chart for CAT. 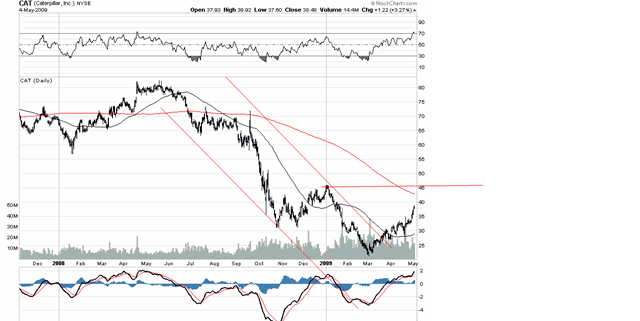 The analysis was fairly easy as the down-turn from 90 was entirely anticipated and the following 5-waves clear as a bell. The stock went a little deeper than expected hitting about $22. Anyway had you bought at the 26 level you would be ahead by about 14 or almost 50%. I would sell here, leaving some on the table for the next guy. CWB not quite as spectacular but did almost do our usual 30% (11 to 14). DE went from a low of $25 to about $45 and should be exited as well. CMI might still go a little further, no entry level was ever given, only timing, it too is up at least 30%.