On March 31 ,2008 BPO was first mentioned as a buy for the very simple reason that the RSI and MACD had been rising for quite some time without the stock doing so (see above chart).

From , more or less, that point the stock started its ascend and to this day has not stopped (see charts below). 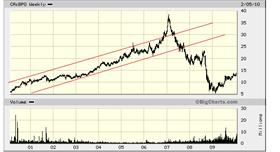 This company is part of the former Brascan conglomerate and related to the Asset Management arm that goes by the ticker PAM.A on Toronto. Properties is actually a US company. It saw its net income tumble by 60% last week when it reported its most recent earnings. Its top line , however, increased slightly while occupancy rates (the achilles  heel of this industry) declined as a result of additions to the portfolio. As essentially these operations consist of bricks and mortar on the asset side against debt on the liability side (even if equity is high) the perception if not reality is that these companies are very sensitive to interest rates.

Relative to where it has been this one could go higher, however, from here on the risk/reward becomes decidedly less attractive. If you still own it use a trailing stop to safeguard your 250% gain.