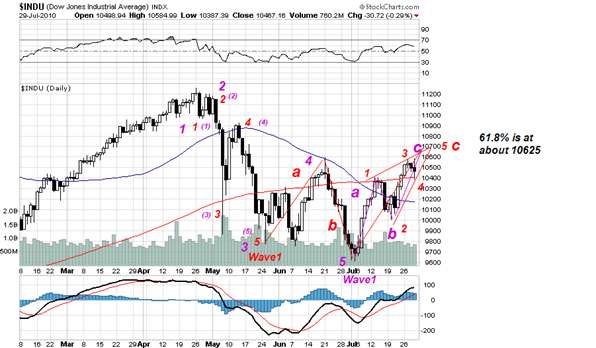 Just a quick update. The red and purple possibilities shown earlier on either the Dow Jones or the S&P are both in the running (the blue one is dead). Essentially this cannot any longer be a series of 1-2s considering the overlaps, but depending how wave one down occured we could be looking at a big  a-b-c counter trend correction (red) in which the c wave is becoming a wedge (which has to be 5 –waves). In the purple scenario wave one is at least a month longer in duration and the a-b-c correction correspondingly shorter. Here the c wave also need 5 subdivisions. So , in both these scenarios we should top out soon. 10625 , or thereabouts is a good target as it represents a 62% retracement (more or less) for both waves one. Given the proximity of the month end etc.etc. the possibility that we already reached the high should not be excluded!

The DAX is just a hundred points from its all time high. Perhaps the recent drop in the level of the Euro has made this country’s economy that much more attractive (they are at least untill recently, the worlds largest exporter) . Others, like the FTSE or the STOX50 and many others are similar to the DJIA