The TSE is just as confusing as all the others. Multiple possibilities exist, but if we simple follow the approach we had on the Dow Jones, we get the following; 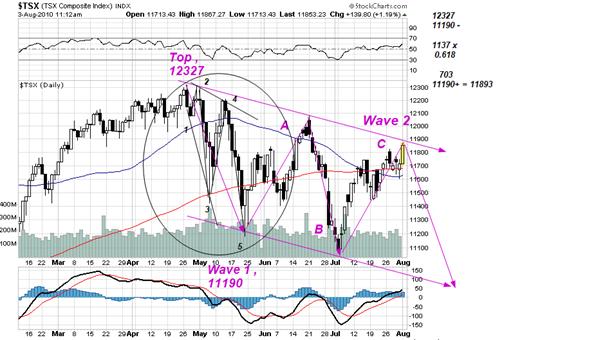 Other counts are possible. The most bearish would be the 1-2, (1)-(2) etc. situation where both wave 2s retraced an inordinate  percentage of the respective preceding down-legs. Another, less bearish count would have this whole thing as a diagonal type 2 structure, which I think is very unlikely.

On the bullish side, an argument could be made that a complete corrective move was finished at the early July low and that we are back in a bull market on our way to new highs.  This view makes more sense if one assumes that this correction started around Jan 7th and the chart above just shows the C wave of a larger A-B-C, itself a B wave in the much larger correction from the lows of May 2008 of about 7500. (as per below).

Very unlikely given the big picture!