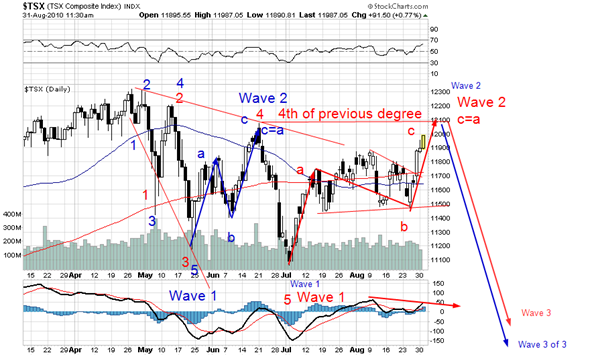 Just heard that the TSE, together with the Tel Aviv stock market, were the only ones to be up for the year and up for the month of August. Even the DAX, despite making a new high, has dropped so much since that it is not in this league. Not sure why Canada is different, perhaps we are more Pavlovian or something like that, perhaps it was Potash but it was only good for about 120 points.   In any case 2 scenarios are still operative, both start with a diagonal type 2, a not so common structure that does allow overlap. Which one is correct does not matter too much as in both cases we should have a wave 3 down ahead of us.

It is fairly common for the TSE to run behind everyone else, Nortel as an example peaked in September whereas the Composite Index in the US did so in May. The C$ had the worst month in a long time, suggesting that Canada too is in a bear.

For the DAX the picture is slightly different as it made (an irregular) new high, or simple a 3-wave 5th wave in a diagonal. The drop off from there is quite violent and this despite all the good news on the economy.