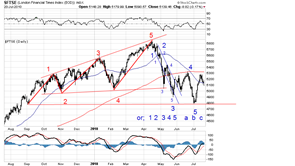 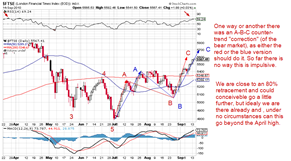 I am using the FTSE as the best proxy for all the markets. It takes, sort of, the middle position and is easily labeled. The chart on the left (click to enlarge) is from June 20th, so about 2 months ago. The preferred count at that time was that the entire drop into the low was a single wave! The “logical” argument for that was that the low corresponded perfectly with the low called for by the preceding “expanding diagonal triangle”, at about 4800. From that point an a-b-c should be expected (as already labeled in the alternative). Normally one would expect the a-b-c to retrace about 61% on average, so , given the 1000 point drop that would take the FTSE to about 4800 + 0.61x 1000 = (about) 5400. We are presently about 160 points above this level but a retracement of 76% or even more of a wave one (of 3 of C) is certainly not unusual, which is where we are right now!

Compared to the TSE(see previous blog below), which is more “compressed” in its structure having probable traced out a wedge type 2 wave one, and compared to the S&P where either a wedge or a simple 5-wave move is possible depending on how you label the subdivisions(see blog on June 20th), the FTSE is the clearest and easiest to read. All have the same message and that is that soon , if not now, the counter-trend of the last two months must stop, otherwise these scenarios are negated!