Update from May31, at which time we suggested the stock should drop. It has done so and has followed the suggested path quite accurately. It got a little lower than expected ($56 rather than $58 ) and it is now rebounding, perhaps to about $62. After that it should have quite a steep drop. Here is the chart; 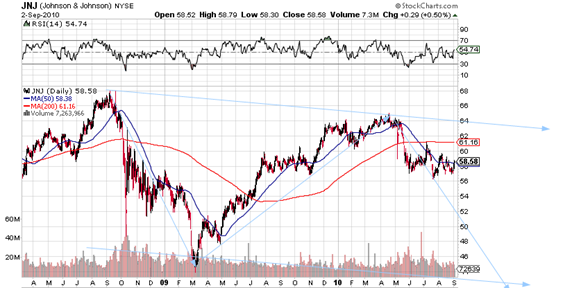 Keep in mind that a 5-wave down never stands alone! so another 5-wave down should follow once the “intermission” is complete.

As far as the Blue-chip stocks is concerned, talk has it that these companies are now able to borrow at costs so low that it can become accretive to borrow for the purpose of buying back it’s own stock. The cost of the borrowing would easily be met by the dividends not paid on the stock cancelled. Theoretically this process could, in the extreme, continue to the point where just one single share is outstanding that would then be entitled to all earnings minus the costs of borrowing – ( which , by extension, is used to explain why the stock will never really drop much). This argument is somewhat flawed, as equity has always been very expensive because of the non-deductibility of dividends. Ergo the argument is neither new , nor does it give recognition to the different functions of equity and debt. Banks etc. are doing the exact opposite for very good reason.