My love for diesel engines goes back quite a way. I served in the Dutch navy where I was to become a “stoker”,an officer in charge of the ships engine room which were mostly powered either by steam turbines or diesels.  In most of North America the average person hates diesels, they stink, make a lot of noise, are slow to react and, should you spill a little while fueling the car, you smell like a skunk for a few days. Furthermore one of the few attempts to put these things in a normal passenger vehicle by Buick was a complete engineering disaster. Europe, with a slightly lower standard of living and higher fuel taxes, could not afford to share these sentiments as it needed the much higher fuel efficiency. Almost 1/2 of all vehicles there are powered by diesels. Given that, it must be quite surprising to see the Cummings stock at highs well above those established before the 2d great depression meltdown. After all vehicle production dropped from 16/17 million to 10 million and is now barely above 11 million, all this with fuel prices at the pump at least doubling but without the slightest increase in diesels popularity.

Two months ago I opined that the stock was too high at $85 or so. In the mean time it went even further and got to $96. Here are the charts, then and now.

Clearly the stock just charged on despite a dropping RSI and MACD. Now it is approaching , for a second time, the upper channel line and soon will be flirting with that magic number $100, that is,  if it even gets there. In the bigger picture there is more reason to be concerned; 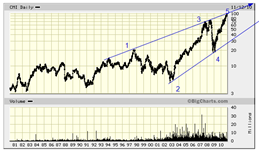 The left, normal, chart shows how well this stock has done and in how short a time frame. There is no other time period in which the stock has gained so much, period. Also it has gone well beyond what ANY trend-line would suggest would be resistance, not even a slight hesitation. More interesting is that when looked at on a log scale there is a very distinct rising wedge that has formed over the past 20 odd years ( waves 4 and 2 overlap which may only happen is this particular structure). These tend to be retraced entirely implying a stock value of near zero sometime in the future. Barring that a return to the 4th wave of previous degree at $20 is perfectly normal. For some reason the round number of $100 seems to be very hard to resist,but I would not expect it to reach that, but to play it safe you may want to wait for that and only then short the stock. The stock pays a dividend just over 1% and has a P/E just under 20. Alternatively a put option might do the trick. CAT and DE fall more or less in the same category. Also remember that;

"There are two times in a man’s life when he should not speculate; when he can’t afford it, and when he can." – Mark Twain