Your neighbors grass always looks greener and the same kind of phenomenon occurs in the realm of investing. The further away from home, the more exotic the place the better it is. Part of the reason for this – apart from the lack of transparency -is that it takes a relatively small amount of additional investment to drive up the price by a disproportional amount. By the same token, the opposite also applies which is why I think it might just about be time to get to the sidelines. Here are two emerging market ETFs. 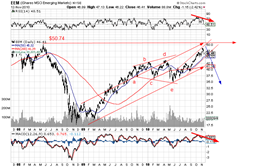 Both are close to double topping but are not quite there yet. Notice that ,where shown, both the RSI and the MACD are not confirming the latest up moves. More importantly, even if it is not perfectly clear what count fits the rise since the lows (could be an a-b-c x a-b-c correction or a 5th wave with 5 waves in it), it is fairly clear that there was an expanding triangle of approximately 10 months duration a little past the middle of the charts. These patterns occur only in 4th or b waves and are a.k.a. megaphones for pretty obvious reasons. As with all triangles the markets quite predictable return to , at least, the lowest point in the triangle or about 25+%. Not a good reason to stick around.

By the way, I have been dead wrong on this one before!