Once again I acknowledge that I do not understand all the hoepla surrounding gold, nor do I have a clear EW count to lean on. Nevertheless it seems to me, once again, a good time to step aside. Here are a few charts, of the stuff and the stocks by way of the XAU. 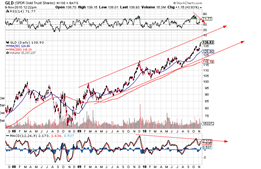 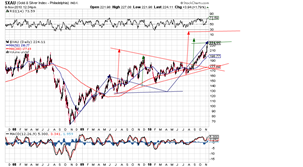 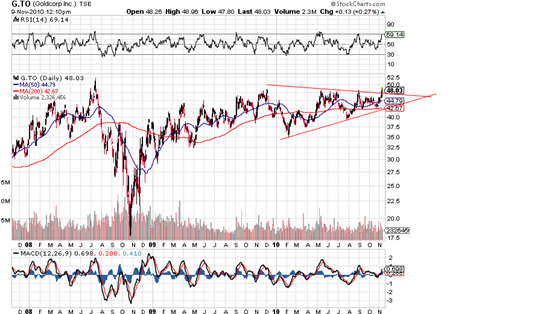 A few things are immediately clear. Goldcorp dropped like a stone just as the world as we know it, at least the financial part, supposedly came to an end. When subsequently Europe became unhinged with Greek , Portugees  and other PIG problems Goldcorp barely budged, in fact it flat-lined for almost two entire years as if oblivious to world events. Fortunes were lost on this stock as a result of predictions then by the pundits that gold would go to $3000 and above, now it is just double topping.

Looking at the XAU as a broader guage of gold stocks, it is readily apparent that there is a disconnect between the stuff and the stocks. The XAU has been triangulating for a year and a half and have only recently continued its trek upwards. Even so it is essentially just double topping and could potentially have completed (or nearly completed) its thrust. The next move should be back to the lowest point in the triangle. The disconnect between stocks and the stuff is probable due to the many ETF that have been created in this space creating the artificial demand for the stuff relative to the stocks. This disconnect or non-confirmation does not bode well.

Gold itself has managed an impressive gain over the past few years, but not more than many other commodities like coffee, wheat and a whole host of others. At this point it is approaching the upper parallel trend-line which has been in force for over two years now. It could go a further $100 or so but then will probable drop at least $250/$300 which it seems to do with the regularity of clockwork.