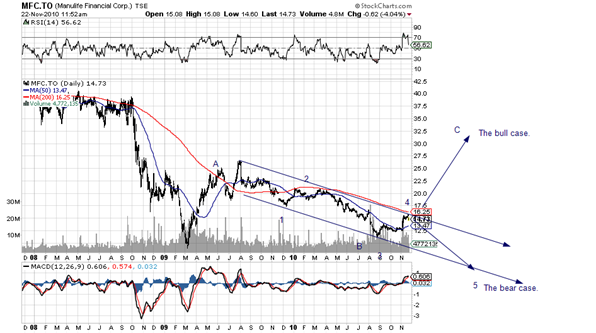 Manulife, as discussed earlier, is a near perfect barometer of where the TSE and other markets may go. This company believed the nonsense that was widely circulating like no other and, having eaten its own cooking  is very sick. In a sense it is the proverbial canary in the coal mine. So far the bird has not succumbed to the toxic gasses but should it fail to cross the upper trend-line soon, things are starting to look downright ugly! The a-b-c (temporary) correction to say $30 would then not apply. Instead a 5-wave C wave would become more plausible dragging the stock down to $4 or lower. Vector equality between the two down legs would occur approximately in March or April of 2012, but a break below $13.50 or so would suggest the bear case is the right one.