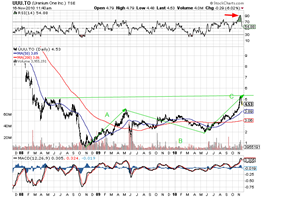 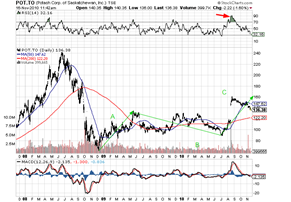 We recommended selling UUU at $5.25, it reached $5.30. Also we loudly recommended selling POT at $160 well before it had reached that level. Both these stocks have (stylized) patterns that are indicative (possible) of a longer term top. They are A-B-C s from the lows, clearly corrective at least so far. Both are predicated on the  notion that China is going to eat a lot more and a lot better and generate a lot more electricity the nuclear way to satisfy its needs. RBC’s, if I am correctly informed, analyst has opined that POT should target $170 within the year and others have similar targets and some are even higher. Of course the American CEO of the company has already made it abundantly clear that the stock should barrel through $240 no problem. Time will tell but I am just a little agnostic about this one. Looking at the bigchart it seems to me entirely possible and plausible that the $240 or so high WAS the bubble high.Here is the chart.

The “corrective” a-b-c that we had up from the lows may well be just the middle intermission so to speak, of a much larger bear pattern that could have a second leg down ( even after we reach $170). In an environment that has been politically poisoned it may just be that no one else is willing to play ball and that Billiton’s price was correct to begin with. In Saskatchewan  they forgot how important it is to make hay while the sun shines.

With regard to uranium I have no idea why it might be peaking here, if that is what it is doing. One interesting possibility might be that we (and the Chinese) are soon going to convert to thorium as a fuel instead of uranium. It has the disadvantage that you cannot make bombs with it (which obviously has secretly been behind the desire to have these plants) but it is available in abundance all over the world, burns up completely so no waste problems, and is easier to control ( no 3-mile island or Chernobels).