On May 5th it was suggested that this stock could rise to, at least the highest point of a 4th wave (triangle?), but at the time it was already approaching $4 so when it does reach $5.25 you will only have a return of slightly more than 30% over  6 months. The reason I show this one is that it has the typical structure of a correction, an A-B-C up from the lows, which may be applicable to the TSE overall. We mentioned this with respect to Manulife, which was hinting at this possibility for quite some time and there are many others. (by the way, I would sell MFC now if bought at around $11). 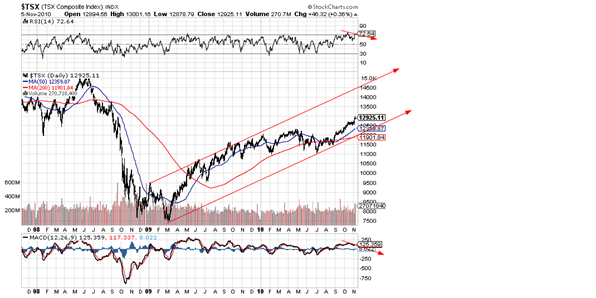 Problem is I cannot get a clear count on this , other than that the moves from Jan. to June 2010 were, in their entirety, a B wave of some sort, perhaps in an A-B-C X A-B-C  sequence. Irrespective of what the count might be (even the gurus in Gainsville seem to have a problem getting it right) , what is clear is that at a retracement of , give or take , 73+% the issue becomes pretty moot. It would seem like nothing ever happened which is a little hard to stomach. I prefer to think that the whole thing is rigged to the nth degree, that the Feds are so afraid of the consequences that hardly bother to keep up appearances and are not just supporting a plunge protection team of like-minded financial institutions but are blatantly targeting the stock market. The rather nefarious happenings around Potash here in Canada, are a good example of what goes on behind the scenes.

In any case at 73% this has to stop soon or we will be making new highs- this after the second great depression-. One cannot but wonder how much was real and how much was fabricated. Both the RSI and MACD are strongly suggesting a pull back is imminent, perhaps the second C is complete.