Back in August when the stock was around $11 we recommended it for , at least, a $5 up move. On Jan 6, just a few weeks ago, we recommended taking the $5 and stepping aside while fully acknowledging that the stock could go a lot further. So far it has not. 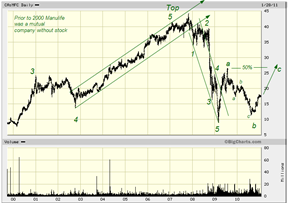 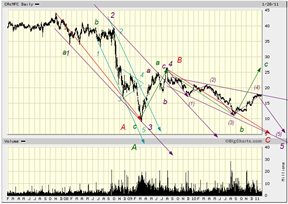 For the past month or more the stock has been hugging the upper trend-line (in purple, right chart) of what could be an expanding diagonal wave C, or even a 5th wave. If so the next big move would be to the downside, to a new low below $9.

If the markets overall are OK, a bit of a stretch at this point , then the stock could climb , gradually, into the high twenties, above the old high of $26. At the very least I would use a tight stop on this stock.

Just to clarify, the Nikkei appears to be in a similar position, only on a much larger scale. But the pattern is the same. Here it is for illustration purposes.

You would presently be at the (purple) 4 if this happens.

Looking at SunLife (SLF) and Great West (GWO) does not add much to the equation; 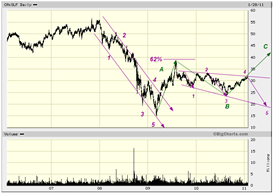 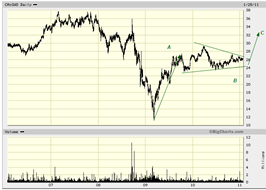 Both have done (relatively) better than MFC and both seem to favour the upside more than the downside. But then neither have the same degree of exposure to the stock markets. MFC has done some hedging but I believe it is only about 25% of the book, and it is now very expensive to do.