Lately our government has been tinkering with mortgages, reducing the amortization  period first from 40 years to 35 and now to 30, reversing policy from just a few years ago. The traditional period was 25 years over the past century or so. The banks, hypocritical as always, insist that they applaud these changes and view them as having only marginal consequences. By the way, in Canada, mortgages are fairly strictly controlled through a mandatory government run (CMHC) insurance system (not cheap!)for any mortgages that do not meet the 20% down payment requirements, which has the effect of relieving the banks from a good part of the credit risk and putting the burden on the taxpayer. In Canada, banks can use either “power of sale” or “foreclosure”, with the effect that, in the event that there is not sufficient equity to extinguish the debt, the homeowner remains liable for the difference. For him/her walking away is never a real option like it is in many States of the US of A.

To approach this issue more moderately, the average mortgage interest rate over the past 30 years was 17.75+2.2/2=9.89% That is a simple average which does not account for the time that the rate was at any specific level, but just for the sake of argument lets say that the rate should be 7% if it had not been for central banks distorting interest rates. Even under that reasonable assumption the cost would be $2,120.34 or about half as much as in the good old days but  also about twice as much as just a few months ago. Today’s homeowner, at least the marginal one (about30%) is acting more like a renter than an owner, cash-flow being everything and the only thing.

The idea that Canada’s housing market is in a bubble may or may not be correct, depending how one defines a bubble. However it is obvious that interest rates are by far the most important factor explaining the rise in prices. It follows then that,  should we ever return to normal rates, whatever they may be, the consequences can be very severe.

Secondly, it always baffles me that in the financial press low interest rate are always and everywhere applauded. Free-marketers , conservatives etc.etc all oppose government meddling in just about everything except when it comes to interest rates. In fact they are oblivious to the distorting effects of these distortions and, incorrectly assume that there are no victims. There are, hordes of them , and they are beginning to come out of the woodwork. Your retiree, for one, who somehow managed to save the $300,000. over his lifetime and is on the other-side of the lending equation with the mortgage bank as intermediary taking a healthy slice off the top, is paying the price, ironically for a second time! This is quickly becoming the largest intergenerational transfer of wealth engineered by central banks and now entering its 7th year! And nobody cares, yet.

Below is a chart from the Dallas Fed, taken from an article by Danielle DiMartino Booth and David Luttrell entitled The Fallacy of a Pain-Free Path to a Healthy Housing Market. I have taken the liberty to add an EW count in the chart. Unfortunately there is very little info available on the Canadian market. 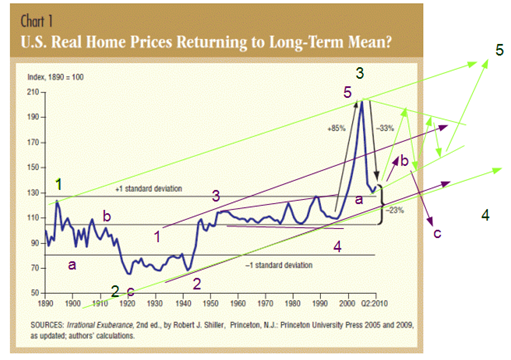 This chart covers 120 years and does not show the prices in real terms (inflation adjusted), instead it shows to what extent- in terms of standard deviations- the prices have deviated from the base level of 100 in 1890. For about 100 years prices did not deviate very much (less than one standard deviation on the upside).  Then from 1995 to 2006 the thing takes off like a rocket. This, from 1920 to 2006 can be counted as a single 5-wave Elliotte wave, shown in purple. The authors, both analysts with the Fed, argue that a further drop of 23% is needed to regress to the mean, and that would be without any overshoot, which is normal. In EW terms a return to the bottom of wave 4 (in purple) is a perfectly reasonable expectation, which obviously would rhyme well with the authors’ views. EW can be extremely complicated and I do not pretend to understand it entirely, even so I would point out that it is conceivable that we are looking at a much higher degree of wave structure where the 3d wave in the chart is only the middle of a much larger 5 wave sequence. Using the guideline of alternation , one would then expect a large triangle (or flat ) to develop in the 4th wave position (in green), as wave 2 is clearly a zig-zag. This could take 40 or more years to complete and then prices would rise again, but remember this is inflation adjusted! Canada, of course, has not yet corrected at all, let alone 33%, so be careful when you embrace the notion that they aren’t making any more of it.