First a chart of just about every single one of them; 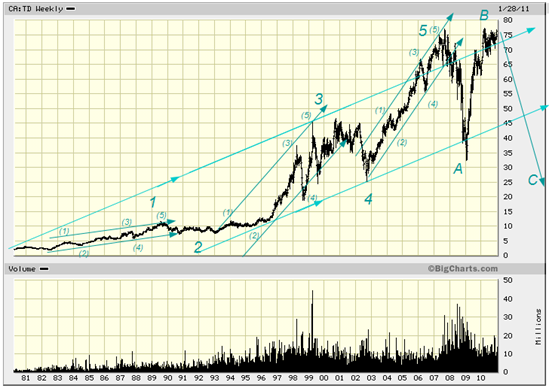 From top to bottom we have RY, which made a new high and then dropped 10% or so, BNS that not only made a new high but stayed up there, CM (CIBC) that seems to be groping in the dark, BMO, middle of the road, NA National, HCG Home Capital Group (see comments elsewhere) the best of the lot and , ironically, the only sub-prime lender, CWB Canadian Western Bank they finance anything that belches diesel smoke and is yellow, the Laurentian Bank and last the TD.

Notice that despite some , sometimes large, deviations most have done more or les the same thing. All had 5 waves up, then a big drop, and then an attempt to a new high. Some failed others did not. The TD is in the middle of the pack with a simple double top.

All are sells! These banks operate as a cartel, with intended or unintended collusion all over the place, with rotating price setting etc. etc. This is the same all over the world but Canada does it best. They have a huge lobby in Ottawa and usually get what they want (with the notable exception of further mergers). If they want private wealth management to stay that way, as opposed to broadening the CPP, they will get that.

There is one big problem with this. Ultimately ,with globalization , the system will have to be opened to competition when Canadians tire of paying twice as much as the next guy. They already have just about everything. In the mid eighties they took over mortgage lending from the trust companies and now control about 80% of that. A few years later they took over all the  major investment dealers and now control much of that. Gradually the independent mutual fund firms are also taken over and now they control the bulk of that. They have made sizeable gains in insurance and are gaining momentum. There is precious little left other than leasing and travel. So where is the growth going to come from?

At the same time new rules  (Basel 3, Volcker, Capital requirements etc.etc.) and regulations are crimping their ability to move beyond the straight and narrow. Not that they ever did much of that but even so they will be doing less of it in the future.  Soon, hopefully, they will lose the absolutely enormous benefit bestowed upon them by ridiculously low rates. This is a mature industry, and the next 20 years are not likely to resemble the last. The only thing they still have going for them is the perception that they are safe blue chips. Any broker who is not sure what to do buys bank stock and this artificially keeps a bid under the stocks, but from the charts it is abundantly clear that this can change very fast as in 2008, maybe it will again.

From a buy low sell high standpoint , none of the above banks are a buy today.