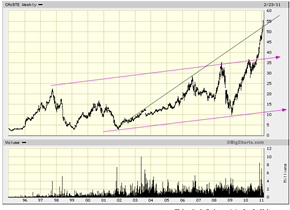 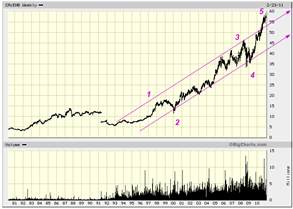 Both these energy stocks have out-performed ,by a remarkable margin, most other energy stocks. I would have sold Baytex when it double topped at $36 and Enbridge at $54 (see Sept. 2010 entry). Both calls were wrong, dead wrong in the case of BTE and marginally in the case of Enbridge. Should you have disregarded my take on these two stocks and still hold them, I would again sell. 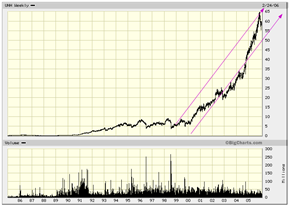 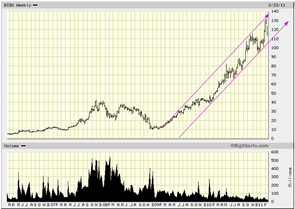 BIDU is, of course an Indian internet stock and has absolutely nothing to do with ENB, except that the chart is perfectly identical except that one is on the $5 to $65 trajectory whereas the other is doing double that i.e. $10 to $130. It’s p/e, by the way, is about double Enbridge’s. Time will tell where they go from here, my guess is down (a lot).

In the case of UNH I thought it was a short at about $25 or so. It doubled from there and then some. We do , however know what the stock did . Below is the chart again, this time to today. 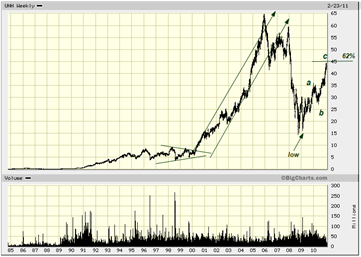 UNH lost 76+% of its value dropping to about $15. It has since retraced 62% in a pretty articulate b-wave, probable a sell once again.