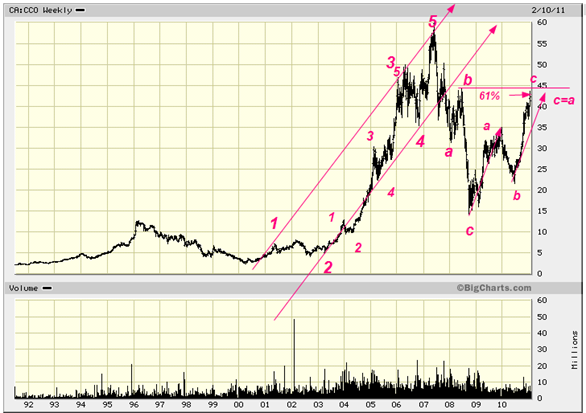 A picture is worth a thousand words! Do we know anymore than the next guy where this is going? Of course not. But we can see the following;

1. The stock has retraced about 62% of the drop in 2009. This does not imply that it cannot go higher, but it does tell you that you could be at a critical point of sorts.

3. Retracements, either up or down often take the form of a-b-c and very often the relationship between the c and a wave is one of equality, i.e. c=a where we are now.

4. Applying the buy low , sell high rule, it is pretty clear that we are more in the high than low range.

5. We could be in a 5th wave up, on our way to $70 or higher. This is certainly not impossible but nevertheless unlikely. In this scenario the drop from 1996 to 2000 would be a wave 2 and the drop in 2008/9 a wave 4. The problem with that is that there is no alternation, not impossible but still a very low probability scenario.

This is a stock that should be exited, plain and simple. See previous blogs