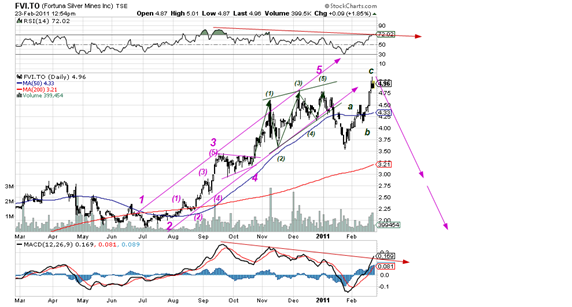 This stock is fascinating in so much that it lost 1/4 of its value right on target, but then it came right back and actually exceeded its previous high of about $4.75. This, I think, is an irregular b-wave; irregular in that it went a little higher but is still classified as part of a bearish structure. The wedge leading the stock into its top has a truncated (5) wave within the wedge which, combined with the irregular b-wave promises a fairly violent downturn from here.Notice that both the RSI and MACD are turning down for quite some time now.

Silver itself is also displaying some clear signs of fatigue, this at a level that is rather precisely 61.8% of the highs ($55) during the Hunt brothers failed market cornering operation back in 1981.See chart of SLV below; 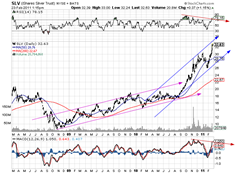