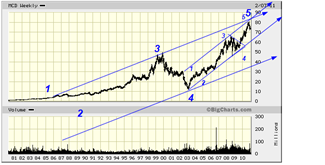 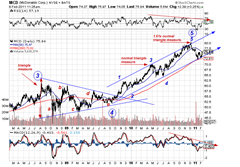 McDonalds has a very interesting chart. Most stocks dropped from 2000 to 2003 and so did the hamburger chain. Than in 2008/9 most stocks dropped again,often by even more but MCD barely budged. Instead of dropping it formed a rather clear and distinct triangle, a consolidation pattern that almost guarantees further gains. These gains “normally”, but nothing is normal in these markets, equate to a level equal to the size of the mouth of the triangle, which is why we thought the stock was overdone at $70.

As it happens the stock kept marching on and recently peaked at about $80, this is roughly 1.6X the triangle measure and about as far as they ever go. Once this , minor counter-trend rally is over (perhaps at $76 or so) this stock should be exited or sold.