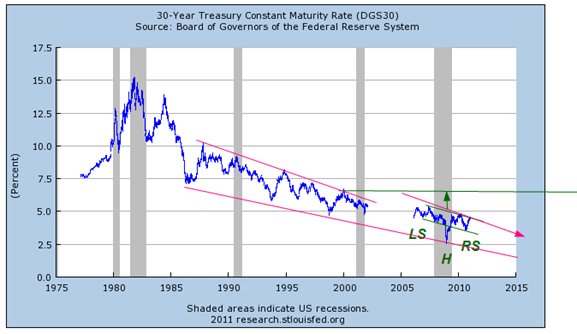 There is a gap in this chart simple because at one point they stopped issuing 30 year bonds, they did not think they needed that maturity given the budget surpluses. Hard to believe now.

The TLT does pretty much the same but on price . not yield, so it is the inverse. 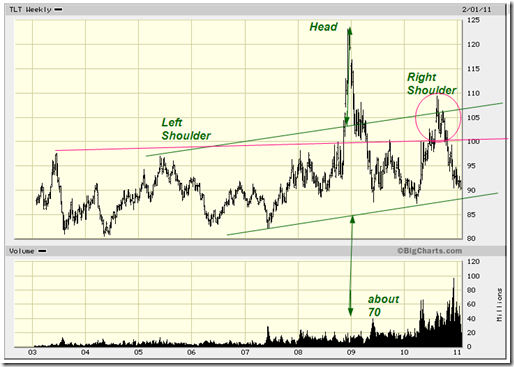 I did not anticipate the jump to 110 on the right shoulder (see previous comments). Ironically the drop from there coincides almost perfectly with the Feds announcement of QE2, not exactly what they had in mind! So here we are at about 90 (4.24% yield), about the average of the past eight years. But it certainly looks like the peak at around 2.30% is behind us. If the head and shoulder pattern is correct the TLT should drop to at least 70 over the next few years which would equate to roughly 7%. Perhaps a level where interest rates should be anyway.

In Canada the XBB ETF , based on a broader bond index (not shown), has a very distinct wedge like structure to it, suggesting it too is about to turn .

Perhaps it will take the same 34 years for yield to go down as it took for them to go up (1945 to 1980). In that case buying a zero-coupon 30-year bond would be very profitable. But this to me is a little like an “after us the deluge” kind of trade, one that does not logically combine with owning any stock.