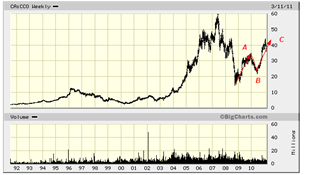 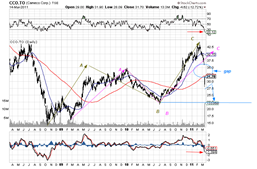 Cameco is, I think , is the worlds largest producer of fuel for nuclear plants. It has had a few flooding problems of its own at the Cigar Lake mine etc.etc. but apart from that it is still the big boy in the sand box. They are like Potash Corp., they even hail from the same province and are neighbours in a manner of speaking.

The Japan tragedy has caused a knee-jerk reaction against nuclear power. Mirroring that the market is now rather fond of solar gadget producers like FSLR. Both are probable misplaced! Nuclear power contributes somewhere between 15% at the low end to 70+% at the high end (France) of the worlds needs for electricity. As it stands there is no known alternative, even if they may one day change to a less belligerent  fuel (thorium as opposed to uranium ?). Solar on the other hand has a bright future but probable not in the next 3/5 years. Our Canadian government, as so many others, has agreed to feed-in-rates that are sometimes a tenfold of the actual costs. Rather than confess their sins they prefer to stall the system by way of administrative delays, hurdles etc.etc. There are untold numbers of farmers etc. that have installed a small fortune on their roofs only to find out it may take 10 years for the connection to the grid! Most of the producers are inefficient but free markets have not prevailed and some of these companies are going to be decimated.

My guess is that CCO is a buy at about $23. By the way, UEX, UUU,and DML (Denison) all have similar chart patterns.