This is the best longer term chart I could find. Clearly the DAX has proven to be as volatile as any considering the rollercoaster ride it has had over the past 10+ years. Just the broad strokes add up to 19000 points, almost triple today’s value. Clearly, if you could figure this out in advance, and if you abstract from possible tax considerations, one would never follow a buy and hold strategy! Interestingly, a buy and sell approach, even with a great many imperfections will, more often than not, outperform.

So where is this going? For the moment the best count that I can put on this is that we have a 3-4-5 top-A-B-C sequence. Assuming the B is complete (it may not quite be), we are presently in wave C of a “flat”. This would suggest that the flat would form within the light blue trapeze, with c probable equal to A in size. This would take the index to about 3000. It could go a little farther to equate to the wave 4 low at about 2500.

A bullish alternative, would be that we are in a 12 year triangle, that is incomplete. All legs or waves within the triangle should be 3-wave structures. This is readily apparent (in green) for waves a, c and d, but less so for b but I would not get overly religious about that. The problem with that count is that it seems to contradict other expectation. BUT time is on our side as, if this is correct, we should first still get wave e (3-wave structure) that should drop to about 5000/4500, well below where we are now.

Not an alternative but rather a reasonable demarcation of the “degree of freedom” that this index has is depicted by the black lines. I use “reasonable " advisedly , knowing that nothing always works; the French learned that with their Maginot line  and the Japanese are learning it now with their tsunami walls. You can always go around it or over it, or it is a Black Swan event that happens only once every 10,000 years but invariable occurs on your watch. Keeping those reservations in mind, the DAX should not trade much above 8200 or below 2800. Conversely these are definite selling or buying opportunities.

To add a little more detail , the chart shows the trapeze type structure of the flat, which normally is characterized by a 3-3-5 structure. There are two possible ways of doing this depending on where you put the “top”. Using the top to the left of where it is shown gives the best symmetric result as this makes C=B=A, so all three legs are equal! In this chart the triangle in the middle of wave B looks just fine, and the two up-legs are reasonable well proportioned, one being a Fibo 61% of the other. In more detail., below this count is a little harder to maintain; 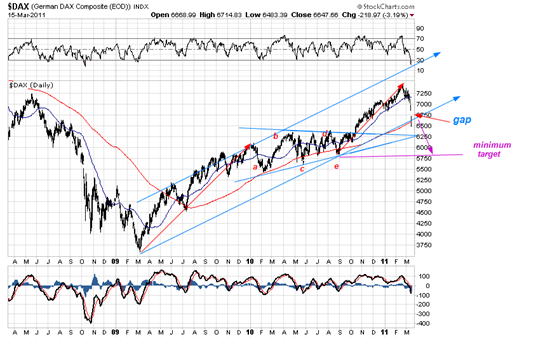 If you look closely you will see that d within the triangle rises slightly above the top of wave b in the triangle. In the original , orthodox EW approach this was not allowed, but Neely and others have come up with the “running triangle” which occurs in situation where the market is overly bullish. so this may be acceptable. Adding it all up the DAX should drop first to 5750, then to 4500 and then to at least 3000. At each juncture the outlook can be adjusted if warranted by circumstances.

As a footnote ,I point out that this count is similar to that of most other markets and the outcome over the next few years will be roughly similar over a dozen or so indices. However, by assuming the high point at the 2007/2008 low, as opposed to using 2000 as the starting point, the degree of the correction that was just finished becomes one higher (it is a B-wave and not wave 2 of C). In my opinion this “fits” much better given the extraordinary persistent nature of this correction. The inherent risk that this brings with it is that the B wave can trade above the previous high, which is not possible for a wave 2. The TSE index is pretty well identical to the DAX, as its high point also was in 2008 and not 2000, see a similar blog about a month ago..