Supposing you wanted to buy one of these what would be the best choice?  all three yield about the same percentage, Philips having a slight advantage. From a P/E perspective General Electric would be the winner by a fairly wide margin. If you like heavy industry Siemens might be your choice but the GE is well represented in that area as well. Medical equipment is made by all three.        Lets look at the charts. 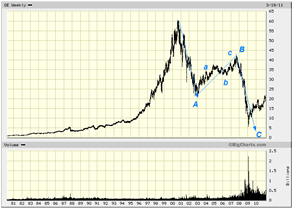 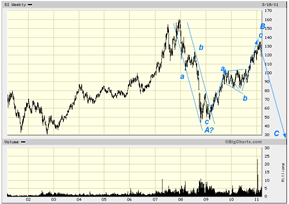 The charts do not have the same time frame. Interestingly, when GE was still close to its highs Siemens was closer to its lows. This was when Jack W was superman and the guys at Siemens were ridiculed for their arterial sclerosis. One had 6-sigma managerial expertise envied by all and the other was viewed as a make-work project. After almost blowing up while trying its managerial skills on “banking” GE dropped 91% to just under $6. Siemens only lost 72% by dropping to a still respectable $45. So much for owning “blue-chips” at the wrong time. 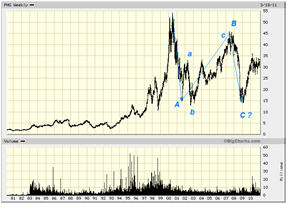 Philips , now Royal Philips is the baby of the three. It is best known for its lighting/glow-lamp division as its full name indicates. Interestingly, it is the only company of this size that uses replacement-cost accounting. Just to avoid the inevitable confusion, it also reports using the traditional historic cost method. As an aside it is somewhat ironic that the FASB in the US has been arguing in favor of mark-to-market accounting – arguable a form of replacement cost accounting but for valuation rather than depreciation purposes – precisely where it is inappropriate, i.e. traditional banking.  The chart for Philips resembles that of GE the most and at the low of the C leg it loses72%, the same as Siemens. Presently it is right in the middle of the range and for that reason alone should not be bought! Given the respective positions of the other two within their range of the last 10 years, GE should be bought and Siemens sold at a 6 to 1 ratio. See the chart on the left , below; 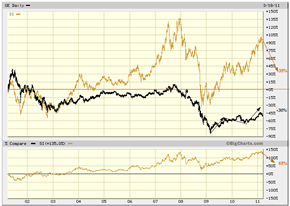 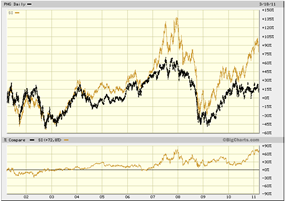 This is not the best pairs trade chart but it will do. Each stock is given the same starting point and the charts simple shows how far the stock is deviation from that starting point in a percentage. The lower chart shows those two percentages added together. A few weeks ago we were at the widest point in the past ten years (and probable also over a much longer time-frame). This trade would be based on this gap narrowing as in 02 and 08. A drop by SI to about $90 and a rise for GE to $25 , both fairly reasonable assumptions,  would close the gap to about 65% from the present 135% , a gain of 70% on the notional investment. Observe that at the end of 2007 the gap was almost as wide as it is today. It took less than a full year to narrow to almost nothing. This is , of course , market neutral as the market’s direction is not relevant to the outcome.       The chart on the right does the same for SI and PHG. Clearly the higher degree of correlation makes that spread (now at +60%) a lot less robust.For GE and PHG the equivalent number is –60%.