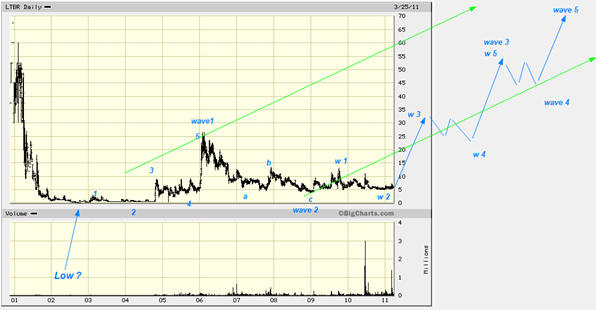 Having spent a few years at the Royal Naval Academy trying to learn how the engine room of a war ship works, I have always retained a soft spot for matters pertaining to engineering, particularly the heavy duty stuff. More recently I was fascinated by the various ways we can utilize nuclear power to generate electricity. Obviously the situation in Japan has focused on this very subject.

Apparently there are workable power station designs that use Thorium as the main fuel. In the US they had one running for 5 years, it was abandoned in 1973 as it did not produce the stuff that goes boom. Just as sex was the father of the VCR, so was the bomb to the advancement of commercial nuclear power. Now that everyone that counts has the bomb, perhaps the world can shift back. China and India are already working on it.

This Thorium fuel has lots of advantages; there is approximately 3X as much of this stuff on earth as uranium, it “burns” more  completely and cleaner, leaves very little waste that decays much and much faster and the process is self controlling. And there is no proliferation problem ! More on this at www.energyfromthorium.com . Chernoble, 3-mile Island and now Japan would not have happened using this technology.  First technologies have a habit of suppressing better technologies that come later, this inertia could be observed clearly with TV. The European TV picture was very much superior to the American one and yet, because of the infrastructure investments already made , the switch over took years. The guys at Lightbridge are working on this and it is the only company that I could find in this space. It is tiny , 75mln cap.

Looking at the chart it is worth noting that this stock once traded at $60 (it used to be called Thorium Power). The last 4 years $5 seems to be bed-rock, the count as shown may simple be wishful thinking, below with a little more detail; 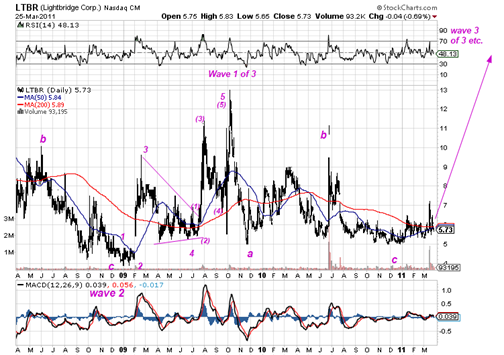 My guess is that we completed a 1,2 , 1,2 sequence, which , if correct , should lead to take-off soon. Needless to say, there is ,as always, no money back guarantee. You are entirely on your own but please do look into it and remember, “nothing ventured, nothing gained”..