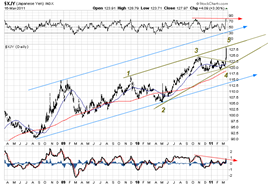 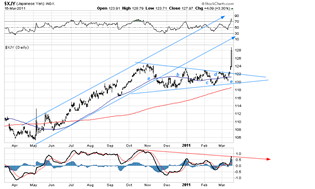 The yen appears to have had a thrust out of a triangle. Another good example of economics turned around. Why a currency would strengthen after such a catastrophic event is intuitively difficult to grasp. The rational is that the Japanese would have to repatriate tons of money, not very convincing. Same thing happened in 1995 with the Kobe earth-quack, in the two years following the initial reaction the currency lost half its value.  The EW triangle with the thrust out of it almost guarantees a return to at least the bottom of he triangle. Disasters simple put, are not good for economies.