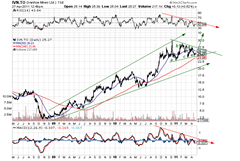 We have liked this stock a lot (see previous blogs) over the past few years, that is until Sept.  last year when it looked as if the stock might have completed a 5 wave move up (see chart on the left). However, the stock did not proceed down, rather it consolidated over an extended period of time suggesting that it may, just like copper, be forming a triangle which is now all but complete. If correct the stock could climb another $8 or so. The 5 wave must be wrong but this could be accommodated by assuming a set of 1-2, 1-2 at the bottom. A stop at about $22 is highly recommended as a break-down remains a distinct possibility. Oddly enough this company may ultimately become its own undoing as its size is such that it could swamp the market with copper once it is on stream.

Both the RSI and MACD continue in negative territory.

We first recommended the stock at $6/7, see below;