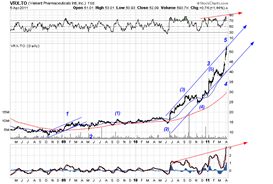 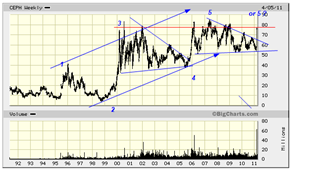 Recently we commented on VRX that it would be advisable to have a tight stop-loss on this stock. Today we would suggest that it is an outright sell. A few reasons for that. The count looks like %-waves up from the low could, repeat could  be complete. Also it went through the $41 target set by RBC DS and knowing how very astute these guys are it looks like we have gone far enough beyond that. Next, last time I went to an air show it did not take long for the bi-plane to drop back into its own exhaust fumes after going vertical, again it looks like we are there. Also I keep hearing that the King in Alice in Wonderland asked the people to believe six unbelievable things before breakfast. Recently an unbelievable thing did happen and that is when BOTH VRX and CEPH went up after announcing a takeover. Not at all a common occurrence, usually , that is almost always,  the acquiring company goes down (paying too much, dilution etc.) and the target company goes up ( you just have to pay a premium). When strange things happen you need to wonder why and lacking a reasonable answer the exit is the best place to go.

CEPH claims that the $5.6 bln is not adequate. Maybe it is , maybe it isn’t but in the meantime ugly things are being said. Also this stock is just a few dollars under the plateau that it could not exceed after trying at least six times over twelve years. I would sell it too.