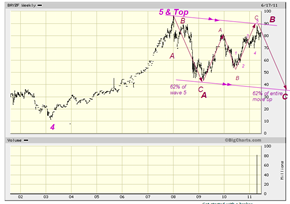 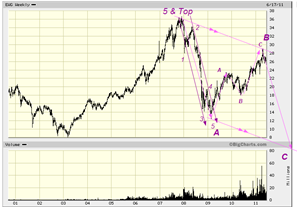 On the left we have Bayer. English people cannot pronounce that and consequently they call it “bear”. As it happens the chart is very bearish. This company is the inventor and manufacturer of the aspirin among many other pharmaceutical and chemical products. In many ways it is comparable in importance for the German economy to GE for that of the US.

On the right we have EWG which is the German ETF. Both top out at around the same time with Bayer once again underlining the importance of big numbers like $100. After the top Bayer crashes in an A-B-C whereas the ETF follows a very nice 5-wave pattern. (the former suggests a “flat” is in the making and the latter is indicative of a “zig-zag”, the difference is immaterial for the moment).

Both charts are stylized, and if the outcome is as expected, the trapeze shown tells us where things might go. As always, time will tell but one thing is certain, stocking up on aspirins is not going to help.

Just for the sake of completeness, we add the Dutch i-shares EWN. Not that the Dutch economy is that important in and of itself, but, as it happens, it is probable the most open economy and its index contains a disproportionate number of large multinationals (Phillips, Unilever, Shell etc.) and it has its finger on Europe’s pulse – oil or the Rhine. It should therefore reflect the effects of a globalized economy best. Here is the chart; 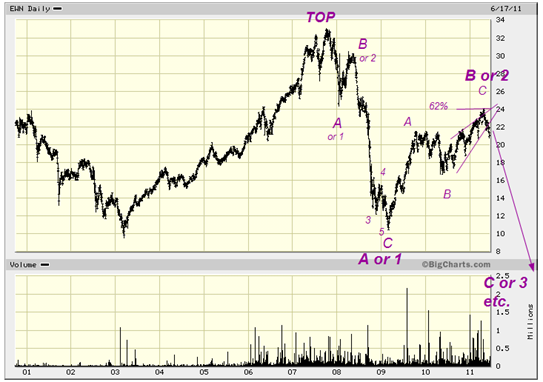 The story is the same, if anything more bearish , as this one wasn’t even able to retrace more than the Fibo 61.8% . Here too it is unclear if the first leg down is 5 waves or an a-b-c. 5-waves fits better given the anemic counter- trend.