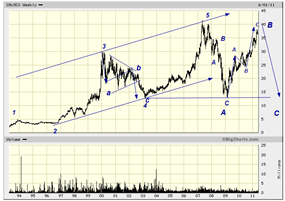 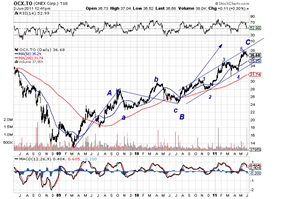 Onex Corp is variously described as a financial institution, a hedge fund or simple a collection of unrelated companies that are owned for no other purpose than to be sold at a higher price. As always these companies are dependent on the cost of financing, interest rates, and the valuations put on the assets held. Both have worked in OCX’s favour over the last two or so years.  The stock is close to double topping to the levels before the great debacle, at about $40.

Two possibilities exist. The stock completed a 5 wave bull market, had its correction , and is now in an entirely new bull market. Or, only wave A of a more complex A-B-C was completed at the lows and , from there, we are in the B-wave which is pretty well complete; next is C down.

The first of the two possibilities is , in my opinion , very unlikely. Valuations in 2007 were pretty lofty and now that we are back to those levels it seems unreasonable to expect much more. Interest rates too can hardly go much lower. Ergo the A-B-C scenario wins hands down from which it follows that this stock is a sell.