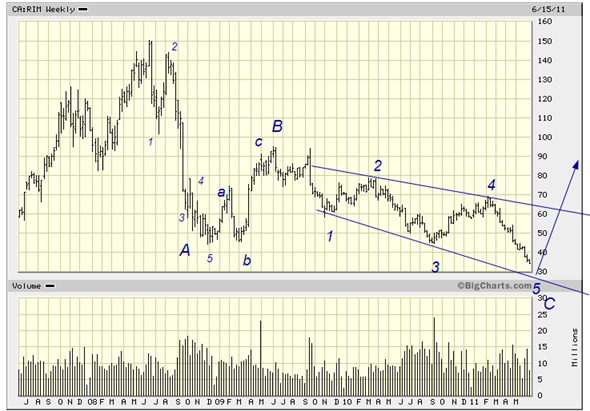 These two charts are unrelated, the top one is that of the Nikkei 225 , an index , covering a period of 30 years or so. The bottom one is that of RIM, a single tech. stock, that , by the way, is reporting tonight.

I used to have an investment advisor sitting right next to me at WG. JP were his initial and he is now a frequent speaker on BNN. I would put two identical charts under his nose and ask if he could see the correlation. More often than not he couldn’t. From that I learned to understand that everything is truly in the eye of the beholder.

To get to the point, I think RIM may or may not drop another dollar or two but the next big move probable is up and quite a bit. The Nikkei has not completed the “diagonal” ( read wedge) yet and should soon drop. In the end both charts will look almost identical, unless you are JP.

Correlation , incidentally, does not, of course, imply any causal relationship! The common factor here is sentiment that has moved from euphoria to grinding despair.