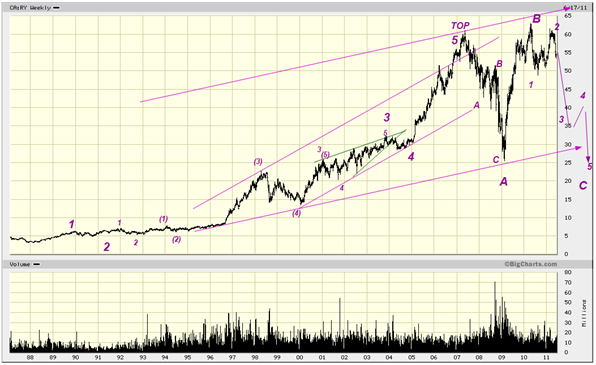 After trying for about ten years or so to make a go of it, the Royal Bank has capitulated to the reality that it could not  run a retail banking franchise profitable in the US , despite the large numbers of “snowbirds” living there. For the Royal that sees itself as almost invincible to the point of being downright arrogant, the admission must come as a psychological shock that , if possible, would no doubt register as a 10 on the Richter scale. The reason , officially , is the lack of scale which “bulking up” could not solve, which begs the question how a few thousand much smaller US banks manage to eek out a living.

The sale will result in proceeds of 3.6 bln , mostly cash but also some PNC shares. A write down of goodwill to the tune of about 1.6 bln will be needed but this is, of course, a non-cash item. The deal will become accretive after a year. Proceeds may or may not be used to expand wealth management opportunities.

Above I have a chart of the Royal showing one possible EW count. I am by no means wedded to this specific one, a good alternative would put the top at the recent high and change the B-wave to a 5th wave. For the immediate future the difference is immaterial as in both cases a return to the $25 level , or worse, is called for.

For Canadians the thought of the Royal (and other banks) trading down to 1/2 of their present value is inconceivable, but forget about EW and look at the fundamentals.

1. Back in the 90-ties interest rates were about 10%, now they are 2%. Over-simplifying things a little the “discount factor” is roughly the inverse of the interest rate and consequently this change alone arguable accounts for at least 1/2 of the share increase from $5 to $60. Should the market distorted rates ever revert to “market” that gain would presumable vanish.

2. In the US it was Glass-Stegall , here it was the 5 pillars , abolished or watered down to become meaningless. This allowed banks to start doing mortgages of which they now have the lions share. It allowed them to become investment dealers (all the big ones were gobbled up), and it allowed them to make substantial inroads in the insurance , wealth management and trust business. This is not going to continue at this pace, some things may even be reversed if some degree of common sense returns to the market.

3. Popular resistance to the nickel & diming approach, for instance on credit cards etc. etc. is increasing and it is hard to see how profitability can be increase further without clashing with usury laws.

So now that the Royal has turned its back on geographic expansion where is the growth going to come from? Without that the banks could be in trouble and a stock price of , say, $25 is not that far-fetched, just look at the chart.

This is not something that is unique to Canadian banks. Below is Wells Fargo. For the last 5 years or more the patterns are slightly different but identical in their meaning ; 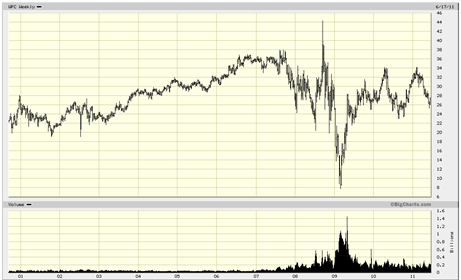